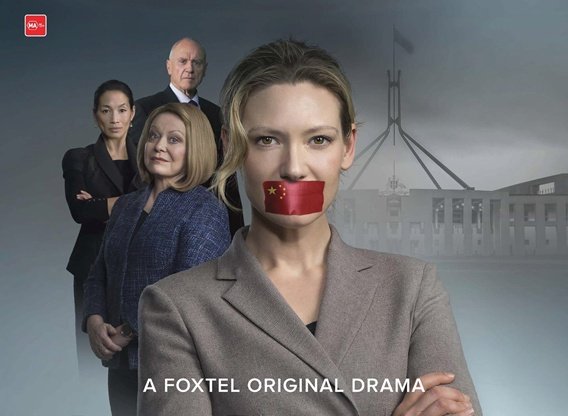 Filmed in Parliament House and locations across Canberra and Sydney, Secret City is inspired by the best-selling novels The Marmalade Files and The Mandarin Code, written by Canberra political journalists Chris Uhlmann and Steve Lewis.

Amidst rising tension between China and America, Canberra press gallery journalist Harriet Dunkley (played by Anna Torv) forces her way closer to the truth, uncovering a secret city of interlocked conspiracies which will threaten her career, her life and endangers the freedom of every Australian.

Foxtel Insider caught up with three stars from the series, Anna Torv, Marcus Graham and The Walking Dead‘s Benedict Samuel to see hoe much they could discloes about this great series.

INSIDER: There’s a lot of expectation about the series and the books that it is based on.

ANNA: Secret City is inspired by the books. There was a big push to emphasis the thriller element from the books, which were a lot lighter in tone.

Steve Lewis is a really respected journalist as well.

MARCUS: He carries a lot of clout too. There was one point where he got in touch with a representative from ASIO and opened a few doors that were rare to enter through. It was quite extraordinary.

ANNA: We did all those scenes in the Prime Minister’s courtyard too.
INSIDER: How does that feel as an actor to be able to access these kinds of places?

MARCUS: Wherever you go you’re with a film crew that kind of take over. But actually in Parliament House, that didn’t really happen. I think everyone was kind of enamoured by the place. Everyone was really polite and quiet. And perhaps feeling like they were being watched all the time.

ANNA: We were. You couldn’t even go to the bathroom without somebody with you.

ANNA: Getting an insight into the members of the press that actually work at Parliament House and the fact that they can run straight from a media conference to their office was really fascinating. Going from this order of calm at the conference to this chaos in the office of people running around saying, “I’ve just got this!’
INSIDER: Foxtel is establishing a name for hard-hitting, great dramas. What will differentiate this show from others that are out there?

BENEDICT: The style and drama that has been delivered has established a great drive in this series. It’s been a great cast to work with and collaborated with telling a story in an area that hasn’t really been broached before and the way in which it is shot too is a token of the quality that the show has set out to achieve, which makes it stand out too.
Secret City airs Sunday nights at 8.30pm from June 5 on Foxtel’s showcase channel.

Following the premiere broadcast each week, Secret City will be available to watch when you want, on demand, via Foxtel Anytime on internet connected iQ boxes. You can also stream the series on demand on Foxtel Play or Foxtel Go. Foxtel Go is included with all Foxtel residential and Foxtel Play subscriptions at no extra cost.