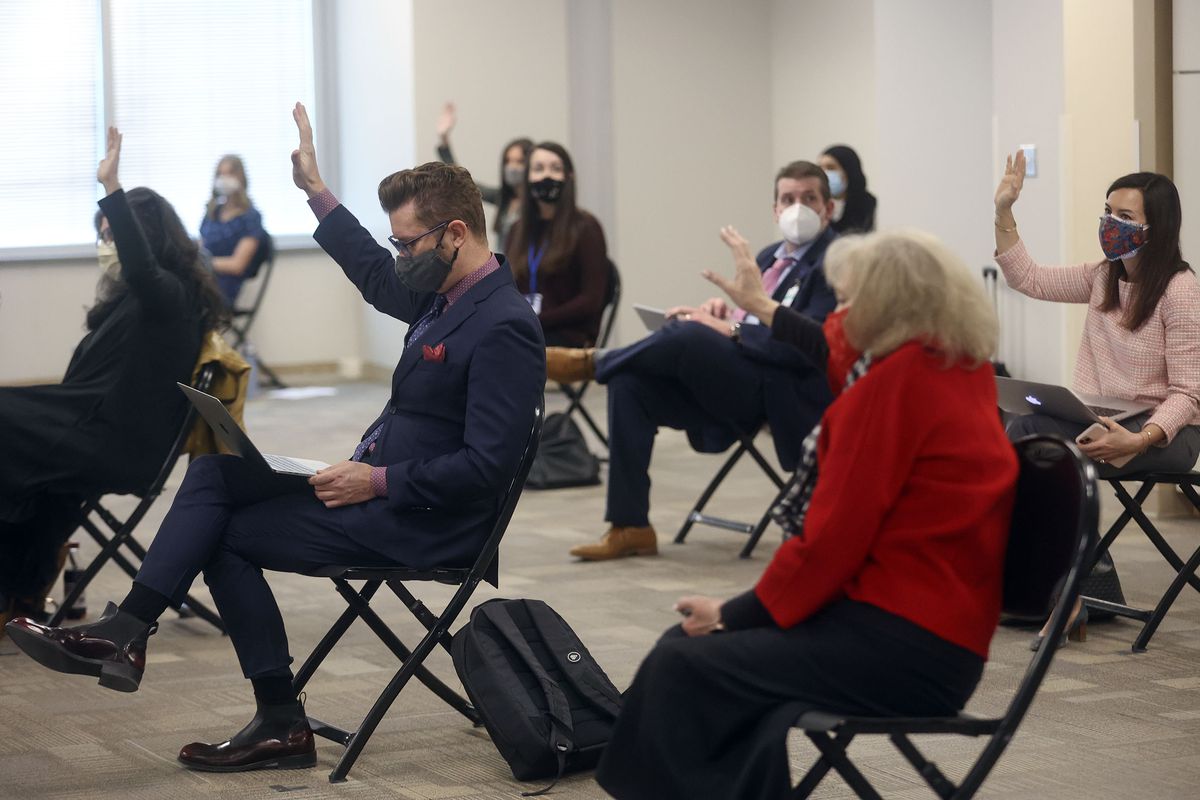 SALT LAKE CITY — A Utah bill to bar transgender girls from playing sports on girls teams at K-12 schools passed the House on Wednesday after a heated debate.

She called the bill “an opportunity to get behind the triumphs and the successes that we have made as females in the sports arena, and to say: ‘You matter and we want fairness for you — not just in parts of your life, but in every aspect including sports.’”

HB302, titled Preserving Sports for Female Students, would require public schools to designate athletic activities by sex. It would prohibit a student of the “male sex” from participating in athletic activities designated for female students. Birkeland introduced a new version of the bill Wednesday that clarifies schools could only be held legally responsible under the law if they knowingly and willingly violate it.

The bill passed the House 50-23 mostly along party lines after those who supported it said it’s needed to ensure fairness for female athletes, and those against it expressed fears of unconstitutionality and potential economic ramifications to the state should the bill become law. It will move to the Senate for consideration.

Rep. Andrew Stoddard, D-Sandy, said the NCAA will withhold events from states that enact “anti-transgender legislation, which is what this is.”

“The 2023 NBA All-Star Game, that will also be gone. Our own sports commission has estimated that will bring in $45 to $50 million in economic impact — gone,” Stoddard said.

Utah will also abandon its chances of hosting a future Olympics, he said, and face millions of dollars in lawsuits like Idaho, which enacted similar legislation last year and has seen the law’s enactment blocked by a federal judge.

Rep. Casey Snider, R-Paradise, said although he was “reticent to engage” in the discussion, he wanted to speak on behalf of his daughter.

He said he ran cross-country in college.

“In high school as a mediocre athlete on the men’s side, I would’ve qualified as a woman in the Olympic trials,” Snider said. “In college, as a middle-of-the-pack athlete, I would have had a record as a woman that would still stand on the books today.”

Birkeland said that is not the case, but it’s to ensure a “fair and safe playing field for our female athletes.”

Rep. Jen Dailey-Provost, D-Salt Lake City, said “I want to point out the fact that the sponsor testified that this bill is about girls not having the same opportunity as boys in sports, and I have to wonder how discriminating against transgender children changes any of that.

“Sports agencies around the world right now are working hard to address the issue of disparate or not disparate advantages between the sexes. These efforts are marked by thoughtful, fair discussion and deliberation. This bill stands in stark contrast of that thoughtful, fair deliberation,” Dailey-Provost said, calling it “cruel, lazy policy.”

“As much as I hate to admit it, we are built differently. There are natural and biological differences,” Pierucci said. “I think girls deserve the same chance to excel and do their best and have it be a fair chance, so I support this legislation.”

“They have suffered some boycotts with some grumblings of extensive additional boycotts,” Owens said.

It would be “prudent to wait and watch what happens in Idaho” before deciding on the law, he said. His effort to hold the bill failed.

Rep. Francis Gibson, R-Mapleton, said Utah needs to lead on the issue “because we do hard things.”

“I don’t have to look at something 5 miles down the road and say, ‘You know what, I’m going to make a decision when I get to that point,’ when we know there’s an opportunity to do something about this in advance,” he said.

He criticized Democratic lawmakers for using potential economic impacts as an argument against the bill, contending that financial concerns “all of the sudden matter” to them.

Birkeland also said she doesn’t want the state to wait to tackle the issue.

“I will not look back in five years when we have moved forward with this issue in a successful way, when everyone who walks onto a court or field with confidence that it is a fair playing field, I won’t regret the anger or the rudeness that has come my way, because I know that this is the right thing to do. This is the beginning of a process for the people of this state,” Birkeland said.

Before the debate Wednesday afternoon, Troy Williams, executive director of Equality Utah, said those against the bill “were not allowed to mount a true defense” during its first committee hearing last week.

“The transgender community was not invited to speak or share their experiences. The committee only allowed public comments with the limitation of one minute,” Williams said in a statement.

During that committee hearing, several showed up in person and dozens queued online to speak against the bill, while a smaller group from the public spoke in support of it. The discussion went on for well over two hours, with the committee deciding to take a vote before the meeting was cut off so lawmakers could attend floor debates that are scheduled for the full chamber.

“We can celebrate women’s sports and also not discriminate against transgender children. But it will require lawmakers who have the courage to slow down, bring people together and seek commonsense solutions,” Williams said.

The Utah Democratic Party said the bill indicates the sponsors work “for D.C. far-right interests dedicated to stripping transgender people of rights for nothing more than their gender identity.”

“We stand against this unnecessary and hurtful legislation, and we know the facts: HB302 comes without the input of the LGBTQ community, isn’t the work of local activists, and would strip millions in NCAA economic impact from our state,” Democratic Party Chairman Jeff Merchant said in a statement. “This Republican bill will, without question, hurt children in our state, and damage our relations with the LGBTQ community irreparably.”

The Utah House Democratic Caucus in a statement after the bill’s passage described it as “needlessly (targeting) youth who are already marginalized and vulnerable to mental anguish and suicide.”

“The bill runs contrary to the spirit of our state’s shared values against discrimination and equal opportunity, and it exposes Utah to millions of dollars in legal fees,” the group said, adding that the Utah High School Activities Association already has policies to address transgender athletes.

“Instead of persecuting kids who deserve our love and support, just let them play sports and let us get back to issues that benefit our constituents,” the caucus said.

The Transgender Education Advocates of Utah called the bill “misguided.” No transgender youth currently participate in sports at schools in the state, the group said, and “human anatomy is diverse.”

“In my 15 years of advocacy work and almost a decade of working with gender-diverse individuals and their families, I have never seen a time when these young people have been more under attack,” said Dr. Candice Metzler, executive director for Transgender Education Advocates of Utah, in a statement.

“The messages being sent to them are damaging on a number of levels,” she said.