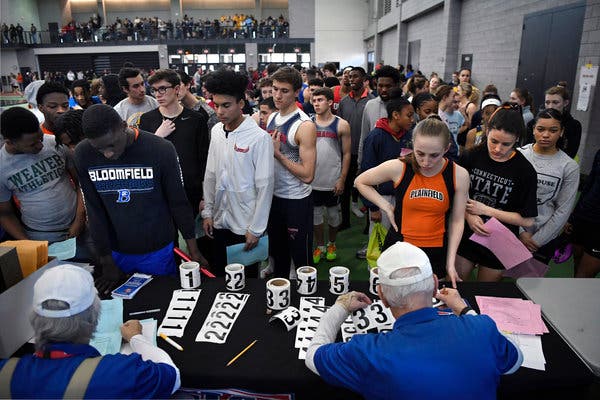 Three female high school students in Connecticut had challenged a scholastic sports policy that allows transgender athletes to compete against them in track.

A high school sports policy in Connecticut that allows transgender students to participate in athletics based on their gender identity violates federal law and could cost the state federal education funding, the Education Department’s Office for Civil Rights has found.

The finding came after the Alliance Defending Freedom, a conservative Christian organization, filed complaints against the Connecticut Interscholastic Athletic Conference and the Glastonbury school board on behalf of three high school student-athletes.

It was issued on May 15 but did not become public until Thursday. The policy is also being challenged in court. The students contended that the policy gave transgender students an unfair advantage in athletic competition and in the race for public recognition that is critical to college recruiting and scholarship opportunities.

The office said that, after an investigation, it had found that the policy violated Title IX, the 1972 federal law that prohibits sex discrimination in programs that receive federal funding.

By allowing transgender students to compete on female track teams, the policy “denied female student-athletes athletic benefits and opportunities, including advancing to the finals in events, higher level competitions, awards, medals, recognition, and the possibility of greater visibility to colleges and other benefits,” the office said.

The office gave the Connecticut Interscholastic Athletic Conference, which governs high school athletics in the state — as well as school officials in Glastonbury, Bloomfield, Hartford, Cromwell, Canton and Danbury — 20 days to resolve the violation.

It said it would then begin the process of suspending, terminating or refusing to grant financial assistance to the association and the districts or refer the cases to the Justice Department for further action.

In 2017, just weeks after the Trump administration took office, the Education and Justice Departments rescinded an Obama-era guidance document that informed schools that denying students access to bathrooms that correspond with their gender identity was a violation under Title IX.

Last year, a report by the liberal Center for American Progress found that students who said they had been discriminated against because of their sexual orientation or gender identity were significantly less likely to get relief from the Education Department’s Office for Civil Rights under the Trump administration than they had been under the Obama administration.

“Today’s finding, which is not a legal ruling, represents another attack from the Trump administration on transgender students,” said Chase Strangio, deputy director for Trans Justice with the ACLU’s L.G.B.T. & H.I.V. Project. “Once again, the administration is wrong on the law, and we will continue to defend transgender students under Title IX and the Constitution. Trans students belong in our schools, including on sports teams, and we will not back down from this fight.”

“Title IX was meant to ensure that gender would never be a barrier to opportunity in our nation’s schools,” Sam Brinton, the organization’s vice president of advocacy and government affairs, said in a statement on Thursday. “This decision by the administration to use it instead to exclude transgender athletes completely warps this landmark civil rights law into a tool of discrimination.”

The Connecticut Interscholastic Athletic Conference said it had adopted the policy in 2013 in accordance with federal and state guidelines.

It said that multiple federal courts and government agencies, including the Justice Department and the Education Department, had acknowledged that the term “sex” in Title IX is “ambiguous and that historical usage of the term ‘sex’ has not kept pace with contemporary science, advances in medical knowledge, and societal norms.”

“Connecticut law is clear and students who identify as female are to be recognized as female for all purposes — including high school sports,” the conference said in a statement.

“To do otherwise would not only be discriminatory but would deprive high school students of the meaningful opportunity to participate in educational activities, including interscholastic sports, based on sex-stereotyping and prejudice sought to be prevented by Title IX and Connecticut state law,” it continued.

The finding came amid a national conflict over whether or how to regulate transgender athletes. In March, Idaho became the first state to bar transgender girls from participating in girls’ and women’s sports and to legalize the practice of asking girls and women to undergo sex testing in order to compete.

The debate has become a wedge issue, especially among conservatives trying to rally support for Mr. Trump.

Chelsea Mitchell, one of the students represented by the group, said in a statement: “It feels like we are finally headed in the right direction, and that we will be able to get justice for the countless girls along with myself that have faced discrimination for years.”

Mark Boughton, the Republican mayor of Danbury, Conn., where one of the female students who sued over the policy goes to high school, said in an interview on Thursday night that the finding was appropriate.

“I’m sure there’s some way that there can be a separate category created for transgender athletes,” Mr. Boughton said. “But I think it’s unfair to directly compete against girls. If you’re male and transition to female, you will be a leg up on a female athlete at that age. I think as people get older and become adults, it’s a different story.”