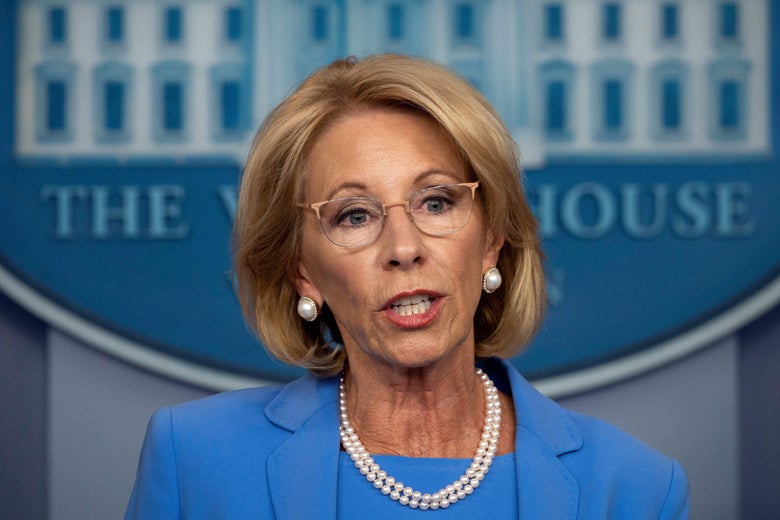 The Trump administration’s relentless assault on the existence of transgender people, including transgender youth and children, continues apace. On May 15, the Department of Education Office for Civil Rights concluded an investigation into Connecticut’s inclusion of transgender student athletes in school sports consistent with their gender identity.* The agency determined that the state’s policy violates Title IX’s prohibition on sex discrimination in education and threatened to defund the schools involved unless they exclude trans athletes. But, characteristically, Betsy DeVos’ Department of Education ignored well-established legal authority in its crusade to coerce local schools to discriminate against trans students. Title IX of the Education Amendments of 1972 does not prohibit inclusion of transgender athletes. Quite the opposite: Title IX actually requires trans inclusion.

The letter announcing the agency’s conclusion contained almost no legal analysis for its conclusion. And, as the letter itself explains, the resolution of this particular complaint does not itself constitute legal precedent. Instead, the letter perfunctorily dictates that trans females are males and therefore that their participation in sex-segregated athletic competitions, in this case track, amounts to sex discrimination against cisgender female athletes under Title IX. (To be clear, trans females are female irrespective of any medical interventions because one’s gender identity—one’s internal sense of being a particular gender—is the most significant determinant of one’s sex).

Being assigned an accurate sex at birth doesn’t mean victory is a birthright.

More importantly, the Department of Education’s emphasis on victory ignores that the purpose of Title IX was to create opportunities for women—all women—and that the overriding goal of scholastic athletics is not winning championships but fostering physical ability, social interaction, mental health, and teamwork among young students. The developmental benefits of athletic participation are acutely important for vulnerable groups, such as transgender students, who already face tremendous barriers in terms of social recognition and feelings of isolation. Regardless of who participates, only a handful of students “win a championship” in any given year. Being assigned an accurate sex at birth doesn’t mean victory is a birthright. Nor should being assigned an inaccurate sex at birth render you perpetually excluded.

To be clear, Title IX’s endorsement of sex-segregated athletics undoubtedly serves an important feminist objective in advancing women’s rights by creating space for women’s athletic competition. But it is important to remember that sex is, in fact, a poor proxy for physical ability or size. Put differently, the range of physical differences within a particular sex group is far greater than the average differences between cisgender males and females. As the National Collegiate Athletic Association recognizes, the assumption that trans females automatically have an unfair advantage when competing against cisgender women is not well-founded. The NCAA explains:

Transgender women display a great deal of physical variation, just as there is a great deal of natural variation in physical size and ability among non-transgender women and men. Many people may have a stereotype that all transgender women are unusually tall and have large bones and muscles. But that is not true. A male-to-female transgender woman may be small and slight, even if she is not on hormone blockers or taking estrogen. It is important not to overgeneralize. The assumption that all male-bodied people are taller, stronger, and more highly skilled in a sport than all female-bodied people is not accurate.

Experience proves the NCAA right. Because sex is a poor proxy for athletic ability and size, many courts have concluded (often on the basis of constitutional sex discrimination prohibitions) that when a school sport is not offered to a particular sex, a student from a different sex must be allowed to participate. Indeed, as to many sports, the Title IX regulations explicitly endorse such an approach. Courts have rejected essentialist arguments claiming that cisgender girls are incapable of participating in sports with boys. If female students must be allowed to participate on a traditionally all-male football team, transgender students must be permitted to compete in accordance with their gender identity.

Highlighting the agency’s radical stance is the fact that defunding threats are supposed to be an enforcement measure of last resort, a tool only used when schools adamantly refuse to comply with clear federal mandates. Yet the agency has never issued a formal interpretation of Title IX’s prohibition on sex discrimination as requiring transgender exclusion (though such a rule has been floated). Indeed, while the Trump administration withdrew Obama administration guidance interpreting Title IX as prohibiting transgender discrimination, it has issued no formal rule or interpretation itself. And when President Donald Trump withdrew the Obama guidance, the administration suggested that issues regarding transgender participation in the educational context should be left to the states—in this case, Connecticut.

Finally, it is worth noting what message the agency’s conclusion regarding transgender youth sports participation sends to students. It communicates to kids—all kids—that winning is more important than belonging, that victory is worth exclusion, and that physical differences matter more than kindness and common humanity. But federal anti-discrimination law, including Title IX, was designed for higher purposes—to promote inclusion, which advances both individual justice and community solidarity. Schools and our federal education administrators should be showing students how to embrace difference, not stigmatize it.