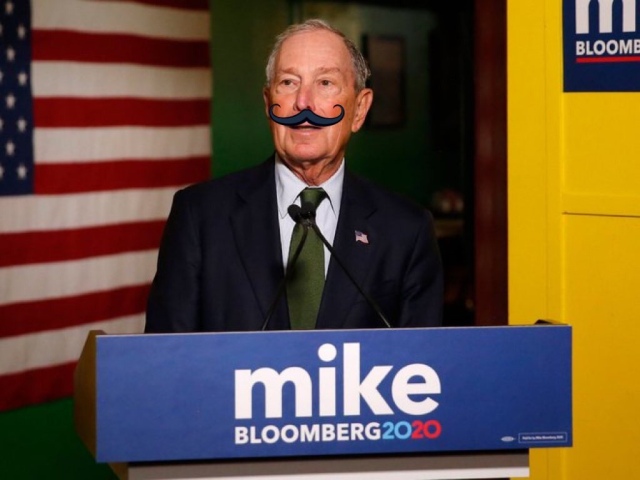 Bloomberg suggested transgender rights would sink Democratic campaigns in comments recorded last year in New York. He’s tried to distance himself from similar comments he made in 2016.

And yet, Bloomberg’s campaign published a new video on Tuesday that pledged the former New York City mayor believed in “inclusivity” for “LGBTQ+ youth,” featuring fashion designer Isaac Mizrahi declaring, “Mike is so incredibly sensitive to this issue.”

Bloomberg’s sensitivity was far less apparent at a forum hosted by the Bermuda Business Development Agency on March 21, 2019, in Manhattan, where Bloomberg derided Democratic candidates for talking about transgender protections.

“If your conversation during a presidential election is about some guy wearing a dress and whether he, she, or it can go to the locker room with their daughter, that’s not a winning formula for most people,” he said.

Bloomberg made a similar remark about a “man wearing a dress” in 2016, but his comments uncovered Tuesday — remarks he made less than a year ago — came amid the early stages of the 2020 Democratic primary.

The video was posted to YouTube shortly after the March event, but has received few views. Bloomberg was not a candidate for president at the time, but announced his campaign just eight months after he made the remarks.

“And so you can understand where somebody like Trump comes from,” Bloomberg said at the forum last year. “You can understand when you look at the Democratic Party, they are so far left that two years ago there was nobody on their side who would take these positions, and today virtually all the candidates for president of the Democratic Party are so progressive. I don’t know what progressive means.”

A Bloomberg campaign spokesperson told BuzzFeed News on Tuesday, “Mike understands that the transgender community has been under attack for decades and the advance of rights has not been equal. In April 2002, during his first year as mayor, Mike signed a sweeping transgender civil rights bill into law. His company provides comprehensive health care coverage for his transgender employees. As president, he has a comprehensive plan to secure rights for transgender Americans, including passing the Equality Act, ensuring transgender people have access to affirming health care and working to end the crisis of violence against transgender women. Mike is running to defeat Donald Trump and reverse the many policies he has implemented that attack the rights of the transgender community.”

His company Bloomberg LP joined a court filing with several dozen other corporations to oppose a North Carolina law that banned transgender people from using restrooms that matched their gender identity in government buildings.

The spokesperson did not directly respond to BuzzFeed News’ questions about whether Bloomberg thinks a transgender woman is “a guy wearing a dress” or an “it,” if transgender rights are a liability for Democratic presidential candidates, or how his campaign video on LGBTQ+ rights squares with his comments less than a year ago.

When Bloomberg raised a similar talking point in 2016, he was discussing the fallout of the North Carolina anti–transgender rights law. According to reports that emerged earlier this month, Bloomberg said, “If you want to know if somebody is a good salesman, give him the job of going to the Midwest and picking a town and selling to that town the concept that some man wearing a dress should be in a locker room with their daughter.”

After those first comments were reported, a Bloomberg campaign spokesperson told NBC News that the billionaire signed a gender identity nondiscrimination bill in 2002 when he was the mayor of New York City.

“Mike is running to defeat Donald Trump and reverse the many policies he has implemented that attack the rights of the transgender community,” the spokesperson told the network.

But the latest video shows that he was still deploying this idea three years later, in 2019, as the primary started to unfold.

A former Republican, Bloomberg has emerged as contender in the Democratic primary after he doused the nation with a $400 million ad buy — enough to boost his poll numbers to 19% among Democrats in a national poll released Tuesday and to qualify for Wednesday’s debate in Nevada.

At the same time, he’s faced a lash of criticism for his past positions on race and gender. The Washington Post reported on several lawsuits that allege discrimination against women, including in one case in which he allegedly told a pregnant employee to “kill” her fetus.

Bloomberg also defended the New York City Police Department’s stop-and-frisk policy — which targeted people of color for searches — in a 2015 speech at the Aspen Institute, saying, “We put all the cops in the minority neighborhoods. Yes, that’s true. Why’d we do it? Because that’s where all the crime is. And the way you should get the guns out of the kids’ hands is throw them against the wall and frisk them.”

Bloomberg tried to distance himself from those comments this month, telling NPR, “I regret that and I have apologized.”

Bloomberg has also tried to reach LGBTQ progressives. In the campaign video released Tuesday, which features a “Mike Bloomberg 2020” emblem in the corner and was retweeted by his campaign, Mizrahi, a designer and entertainer, begins, “My thing is LGBTQ+ youth.”

“As a kid you feel completely ostracized, completely on the outside of everything, but then as an adult you see there is a whole bunch of inclusivity,” Mizrahi continues. “Mike is so incredibly sensitive to this issue. Having lived in New York for a number of years that Mike was mayor and seeing him enact these incredible programs that helped both the adult LGBTQ populations but also the kids, the thing I like about Mike is that he’s really proactive.”

“There is no one more perfect than Mike,” he concludes.

Back at the March 2019 forum, Bloomberg said he’d largely ruled out running for president this year due to his political views, saying in a video, “It’s just not going to happen on a national level for somebody like me starting where I am, unless I was going to change all my views and go on what CNN calls an apology tour.”

This is Bloomberg’s full quote from the forum:

“’Throw the bums out, they haven’t delivered, they didn’t listen to us.’ If you go to the middle of the country, people would say. If your conversation during a presidential election is about some guy wearing a dress and whether he, she, or it can go to the locker room with their daughter, that’s not a winning formula for most people. They care about health care, they care about education, they care about safety, and all of those kinds of things. And some of these social issues — and not just the American government, the EU government does as well — we are focusing on a lot of things that have little relevance to people who are trying to live in a world that is changing because of technology and communications and things like that. And so you can understand where somebody like Trump comes from; you can understand when you look at the Democratic Party, they are so far left that two years ago there was nobody on their side who would take these positions, and today virtually all the candidates for president of the Democratic Party are so progressive. I don’t know what progressive means. They are in a place where some of the American public is, and it remains to be seen if the remainder of the electorate is.”