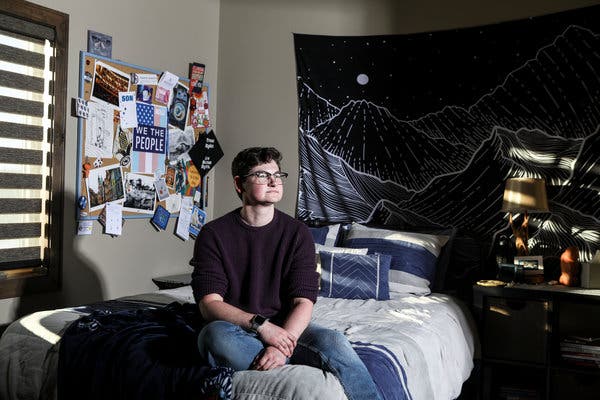 In South Dakota and other states, lawmakers are considering bills that would restrict access to hormone treatment and surgeries for young transgender people.

A “bathroom bill” to regulate the restroom choice of transgender people has failed in South Dakota. So has a bill that would have required high school athletes to play on a sports team according to their sex at birth, not their gender identity.

But it is a new year and a new legislative session, and a group of South Dakota lawmakers is trying to pass a new restriction on transgender teenagers that the lawmakers say would prevent unnecessary medical procedures.

The proposed law, which is expected to go up for a vote in the state’s House of Representatives on Monday, would bar doctors from prescribing hormones or puberty-blocking medication or performing transgender surgeries on anyone under the age of 16.

The bill has strong support from social conservatives in the Republican-controlled Legislature, who believe it would enforce a common-sense view: that transgender youths under 16 are too young to begin taking medication or hormones.

But rural libertarians, Democrats, transgender people and the medical community have lined up against it, saying that it would harm transgender teenagers who greatly benefit from those treatments, particularly puberty blockers. Doctors have been particularly appalled; they could face criminal charges and jail time for violating the new law, should it pass the Legislature and be signed by Gov. Kristi Noem, a Republican who has expressed concerns about it.

“I’ve heard ‘It interferes with parental rights,’ and that ‘doctor knows best,’” said Representative Lee Qualm, a Republican who is the House majority leader and a sponsor of the bill.

“I understand people can go a lot of ways on this,” Mr. Qualm said.

What’s behind the bill?

Representative Fred Deutsch, who introduced the bill, said he got the idea when he was surfing the internet last year. He said he had heard about people in other states who regretted transitioning from one gender to another, and wondered whether such treatments were offered in his state.

“I Googled ‘transgender medicine South Dakota’ and I found a handful of doctors, not many, that do the procedures,” said Mr. Deutsch, who also introduced the bathroom bill in 2016. “And that’s the genesis of the concept of this bill.”

Mr. Deutsch, a chiropractor, said he had received input on the legislation from the Kelsey Coalition, a parent group that opposes hormone treatment for transgender children, and the Alliance Defending Freedom, a conservative group based in Scottsdale, Ariz., whose leaders declined an interview request, as well as other groups. Mr. Deutsch said he had also given drafts of his bill to lawmakers in other states considering similar measures.

“This bill came out of that feeling of, We need to protect our children,” he said, comparing the legislation to a “pause button.” “When you turn 16 you can do whatever you want. But by golly, can’t you just wait before you take these drugs?”

It is relatively uncommon for teenagers in South Dakota to undergo gender-affirming surgery, such as mastectomies for transgender boys, because most medical professionals advise waiting until adulthood for permanent procedures. The bill would affect far more teenagers who are prescribed puberty blockers, injections or implants that are frequently administered to children who are experiencing gender dysphoria as a way to pause the process of puberty.

But those treatments worry advocates of the bill, who say they are concerned that children are not old enough to decide whether they want to delay puberty. “We are a coalition of parents who are standing together to stop the harming of children,” said Lynn Meagher, a parent from Washington State.

Medical professionals who treat transgender youth said that the medicines could be lifesaving, helping to diminish anxiety, depression and suicidal behavior. For many transgender teenagers, the development of their bodies during puberty — particularly the growth of breasts — can deepen their psychological stress.

“They’re not using actual evidence,” said Dr. Alexis Chávez, a psychiatrist who is the medical director for the Trevor Project, a national organization focused on preventing suicide among lesbian, gay, bisexual and transgender youths. “They’re not using the research. They’re not listening to any health care providers. And they’re advancing something that’s very dangerous to make a statement.”

Senator Reynold Nesiba, a Democrat and an economics professor, said his primary concern with the bill was the way it was being framed.

“Here we are in the Capitol in Pierre, S.D., at a great distance, trying to influence a decision that is so personal and really needs to be made by the child, the parent and the physician,” he said. “And from the evidence I’ve seen, there is no evidence that physicians are doing harm.”

South Dakota, where Republicans have full control of state government, has become a proving ground for conservative legislation on issues such as abortion, gun rights and, in recent years, transgender rights. One reason the state is appealing for such experimentation: Every bill introduced in South Dakota is guaranteed a public hearing.

If an issue survives in South Dakota, that can make it easier for conservative groups to pitch a policy to lawmakers in other states. This year, bills restricting medical care for transgender children have also been introduced in several states, including Colorado, Florida, Missouri and South Carolina, though none of those bills have advanced out of committee.

“Once you pass one of these bills somewhere, it gets a heck of a lot easier to pass them somewhere else,” said Libby Skarin, the policy director for the American Civil Liberties Union of South Dakota, which opposes the bill banning treatment for transgender teenagers and has threatened to sue if it becomes law.

Though South Dakota is a heavily conservative state, there is nuance within its Republican Party. Three House Republicans voted against sending the bill to the full House, after a hearing in which out-of-state proponents of the bill testified on video. Even some supporters acknowledge that transgender restrictions are not a top priority for constituents.

Samson Mettler, a 22-year-old college student in Sioux Falls who is transgender, said he was dismayed to hear about the bill several weeks ago — particularly knowing that other bills that would have curtailed transgender rights had already failed in South Dakota.

Andrew C., 17, a transgender boy who lives in a small town near Sioux Falls, said he heard about the bill on a local news website this month. He immediately feared that he would have to end the hormone treatment he began last summer. The bill, which initially called for banning treatment for those under 18, was later changed to apply only to those 15 and younger.

“I was like, ‘They can’t be doing this stuff again,’” said Andrew, an aspiring teacher who, citing privacy concerns, spoke on the condition that his surname not be used. “The legislators, they don’t understand the people that it could affect.”

If the bill passes in the House, it could advance to the Senate in the next week.

Should it succeed in the Senate, its fate is still uncertain. In 2016, the veto pen of a Republican governor, Dennis Daugaard, blocked the bathroom restrictions from taking effect. Ms. Noem, the current governor, has said that she would have signed that bathroom bill.

But at a news conference on Friday, Ms. Noem expressed “a few concerns” about the legislation restricting medical treatment.

“When you take public policy and try to fill parenting gaps with more government, you have to be very careful about the precedent you’re setting,” she told reporters. Ms. Noem has not said publicly whether she would sign the bill.