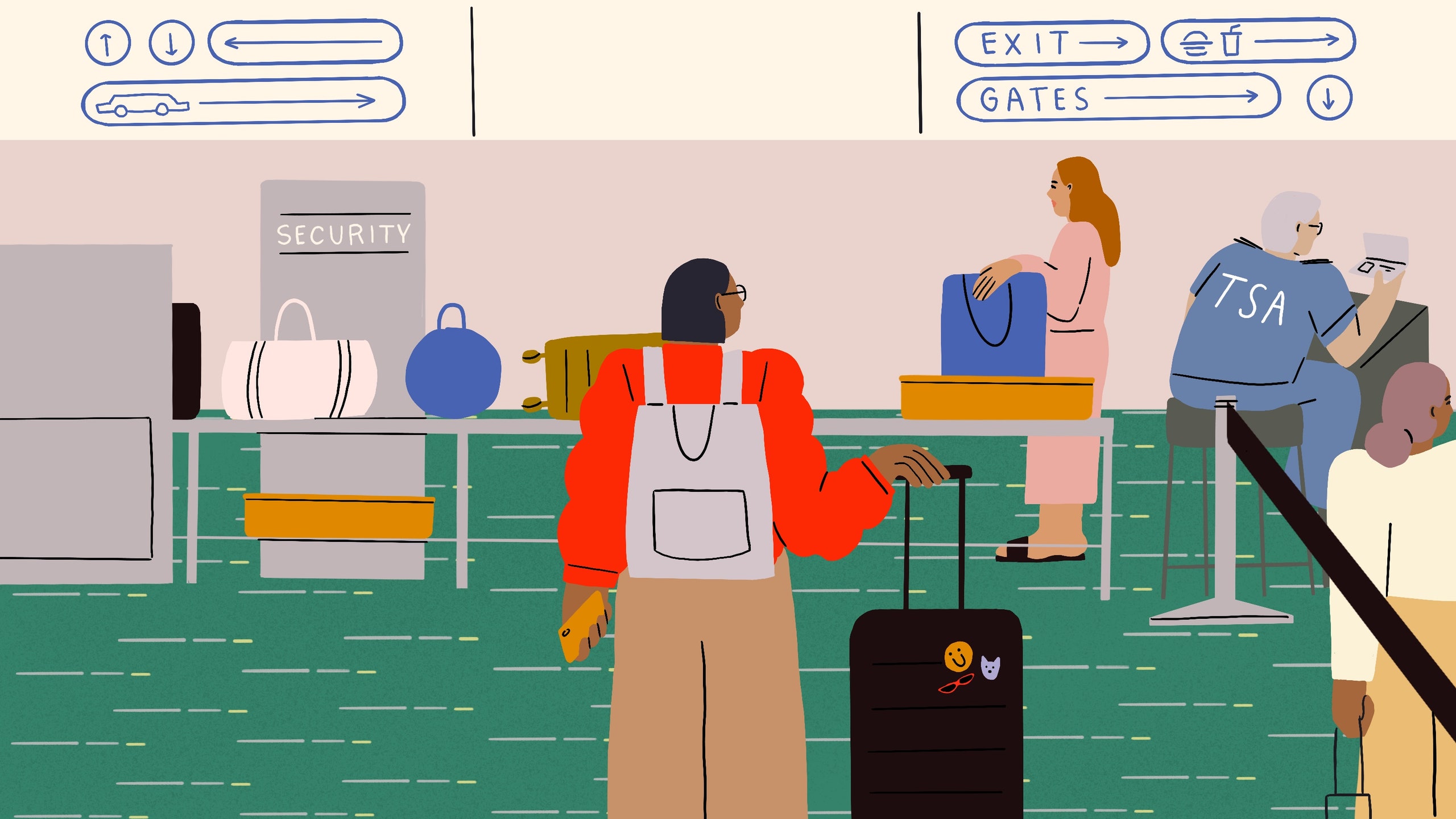 People tend to look at me funny when I tell them I love flying, but it’s true. I always have. I’ve gotten my packing process down to a science and airports give me an excuse to put my phone on airplane mode for a few hours and catch up on reading without distraction.

But as I left for a recent work trip, I was unable to ease my travel anxiety. My palms were sweaty, I felt vaguely nauseous, and the closer I got to the airport, the more my heart began to race. It was my first flight since I started my transition, so for the first time in a long time, I had no idea what to expect. Every trans person I know has an airport story, often involving an inadvertent misunderstanding with a TSA agent, others with more intentional malice and discrimination.

As it turned out, my experience ended up being pretty uneventful. When the agent scanning my boarding pass examined my passport, a flicker of recognition crossed her face before she let me go without a word. I went through the body scanner knowing I would probably be fine because I’ve had top surgery, and I was right. I’m one of the lucky ones.

ProPublica recently reviewed all data that’s publicly available regarding complaints against the TSA and found that five percent of civil rights complaints filed with the TSA between January of 2016 and April of 2019 were from trans and gender-nonconforming individuals, despite the fact that we make up less than one percentof the population. And that was just of the people who chose to report.

The TSA body scanners that are used in standard security protocols in airports were not designed for people with bodies that aren’t gender-normative. TSA agents have just a few moments to hit a blue or pink button before a person steps into the machine. If there’s a penis or breasts where the machine thinks there should not be, an alarm goes off.

If you end up having a negative or unsafe experience, it’s important to know your rights.

As of this year, TSA agents are now required to partake in training on how to work with transgender passengers. But resources are limited, so the training simply consists of a 30-minute online program, and the level of turnover in the TSA is high, with an approximate 17 percent attrition rate. Of the 174 people who spoke to ProPublica, one woman reported that after asking to be patted down by a woman, she was refused and instead patted down by two male agents. Others reported being forced to show their genitals to TSA agents. Some felt as though they’re assigned agents based on the gender they identify as, while others felt as though how they identified was not respected.

For any trans or gender non-conforming individual, being aware of the potential for any of these possibilities can cause anxiety before one even sets foot in an airport. But there are ways to make the experience a little less stressful without foregoing air travel altogether. And if you’re an ally, there are ways to support your trans and gender non-conforming friends so they feel safer in their travels.

Things You Can Do to Prepare and Feel More At Ease

If you fly frequently, consider getting TSA PreCheck. Your line to get through security will generally be shorter, which will give you more time to deal with any issues that might come up. You’ll have an expedited screening process and the perk of not having to take your shoes off in an airport, according to the TSA website. However, it does cost $85 for a five-year membership, so if that’s prohibitive for you for whatever reason, there are other things you can do to ease anxiety.

Make sure you know what you can and cannot take in your carry-on, wear comfortable shoes, and double-check any items you’re unsure of.

If you’re a less frequent traveler (or even if you’re not), it’s a good idea to make sure you’re packing and preparing correctly for your trip. Make sure you know what you can and cannot take in your carry-on, wear comfortable shoes, and double-check any items you’re unsure of. If you have a medication that requires syringes (like testosterone), have the prescription on hand so you can show an agent if the syringes are flagged.

For those who choose to wear a packer, a binder, or any other restrictive or enhancing garment, know that there’s a chance it will set off the machine. If that happens, respond as directly as possible and in a straightforward way. For example, if you’re wearing a binder, pull the agent aside and say, “This is a chest binder I wear to make my chest appear smaller, because of my gender identity and presentation.” Having a prepared response in advance can alleviate anxiety, and if you can provide an answer with confidence, you may be able to avoid further questioning. If the TSA agent continues to make it difficult for you to move forward, providing concise yet honest answers will also likely give you more success in filing a complaint later.

Ask for their input on travel plans

If you’re cisgender and traveling with someone who is trans, be mindful they experience things you don’t have to deal with or think about. Talk to them before booking travel if you’re planning the itinerary, as some airports and airlines have better reputations with trans customers than others. Ask if they would like you to intervene should a case of misgendering come up. Go through security together, if possible, and if they have asked for your help, advocate for them when and where you can. In some cases, there won’t be much you can do (as people are often pulled into separate rooms if security is an issue), but just knowing there is a friend nearby can make things a little easier.

Know what to do if something does happen

If you or a friend ends up having a negative or unsafe experience, it’s important to know your rights. The National Center for Transgender Equality has a guide on who to talk to and how to file a report in the case of discrimination. There’s even an app called FlyRights that will let you file a report from your phone immediately.

The way transgender people are treated in airports is unfortunately just a symptom of a much larger problem. Unfortunately, lack of awareness around gender is a huge issue, and though it’s one that extends outside of the baggage claim, TSA body scanners and airports are designed for a binary society that puts anyone outside of the norm at risk. Luckily, there are people working to make those changes on a more systemic level. But in the meantime, do what you can to take care of yourself and your friends.