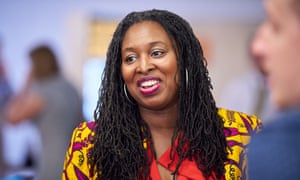 Labour has said that it will preserve women-only spaces where such treatment “is justified”, amid an internal rift over its policy towards trans people.

The clarification from the party came after women’s rights activists accused the party of backsliding on its manifesto commitment to retaining “single-sex-based exemptions”. They said the exemptions were necessary to ensure that services such as refuges, prisons and changing rooms would not have to be open to people who self-identify as female, as well as those born female.

Confusion emerged after Labour’s equalities spokeswoman, Dawn Butler, attacked what she described as outdated legal measures designed to protect single-sex facilities. She said there was “no way [that] spaces will be permitted to discriminate against trans people”.

Ruth Serwotka, from the campaign group Woman’s Place UK, said she was concerned that Butler’s comments diluted Labour’s manifesto commitment that protections for single-sex spaces are “understood and fully enforced in service provision”.

She told BBC Radio 4’s Todayprogramme: “The Equality Act is clear that it is lawful to allow single-sex services for women who require therapeutic space – in refuges, in prisons, all of those places,” she said. “For a [shadow] minister to be suggesting that that is not the case really does ring alarm bells.

“We have to continue to understand what the sex is at birth, and that that is the basis on which lots of services continue to be provided.”

Laura Pidcock, a shadow cabinet minister, said: “I think that there has to be the enforcement of single-space exemptions for women to heal and recover; and it is absolutely crucial that there are spaces, that there is provision, for trans people to also get the help and support they need.”

In a statement yesterday, a Labour spokesperson said: “Our commitment to reforming the Gender Recognition Act, to introduce self-declaration for transgender people, is undimmed.

“Labour will amend the Equality Act 2010 to ensure it protects trans people by changing the protected characteristic of ‘gender assignment’ to ‘gender identity’ and removing other outdated language such as ‘transsexual’.

“The Equality Act will continue to allow for separate and single-sex services, providing that such treatment by a provider is justified, but no spaces will be permitted to discriminate against trans people.”