Muhlaysia Booker was a nurturer: the 22-year-old transgender woman took care of her community and loved to make people laugh.

She told relatable stories in live videos, made sure friends had a place to sleep, enjoyed getting her makeup done and dreamed of traveling to Austin.

She shouldn’t be dead, says one childhood friend, who, six months later, is still seeking an explanation to why a man killed Booker, leaving her lying face down in the street and shattering their plans for the future.

Long after the names of murdered transgender women disappear from social media feeds, their loved ones are still searching for justice and closure. It can take years for an arrest or conviction, leading family to often question whether the killings are being treated as a priority by law enforcement.

In some cases, police and lawyers inflict further harm by misgendering and misnaming victims. And, in every case, advocates say convictions do not prevent violence against transgender people in the first place.

Jessica Anderson recognizes the upcoming prosecution of Booker’s suspected killer can only do so much.

“I would love for him to stay behind bars, but it’s still not going to bring my best friend back,” Anderson says.

Muhlaysia Booker: Her name is still ‘being dragged through the mud,’ friend says

Nationally, Booker is one of at least 22 transgender people killed in 2019 who will be honored at Transgender Day of Remembrance vigils on Wednesday, according to the Human Rights Campaign. She is one of four black transgender women who have died in Texas.

About a month before she was fatally shot, Booker went viral — but it wasn’t through one of her Facebook live videos, where she shared day-to-day experiences with some 20,000 followers. A video of a group assaulting Booker in her hometown of Dallas garnered thousands of views.

In this Friday, April 20, 2019 photo, Muhlaysia Booker speaks during a rally in Dallas.
RYAN MICHALESKO, AP

It wasn’t the first time Booker survived assault, Anderson says, recounting that someone threw urine at Booker while she worked a fast food drive-thru window and another instance in which football players jumped her as she walked home. Booker had tough skin, Anderson says, and tried to smile through it all.

The viral assault, though, was followed by cyberbullying, as some accused her of orchestrating the beating to raise money, pushing Booker to the point where she wanted to quit, her friend remembers. A foundation started a GoFundMe campaign to support Booker but reported that she didn’t receive any money.

Anderson says she made sure Booker, who cared greatly for both transgender youth and her sister La’Quincia, had food to eat and clothes to wear during her recovery.

Muhlaysia Booker, 22, was murdered in May 2018, one month after a video of an assault against her went viral. She is one of 22 transgender people killed in 2019, according to the HRC.

“I even offered for her to stay with me, but she didn’t want to ’cause she felt like she was intruding on me and my boyfriend’s life,” Anderson says, noting they had been friends since they were toddlers.

Since Booker’s assault and murder, which are separate cases with different suspects, Anderson has lost weight and been in and out of the hospital. She says the stress and grief exacerbated her chronic health conditions, which prevented her from attending the trial of one of the men accused of beating Booker.

‘We are not drag queens’: For transgender people in 2019, a conflicted reality of breakthroughs, barriers

Booker’s mother and sister told Anderson about how the defense refused to recognize Booker as a woman and used her birth name. They also relayed how the jury convicted the attacker of a misdemeanor, not a felony, and sentenced him to 300 days in jail.

“Even after her death, it still feels like her name is being dragged through the mud,” Anderson says. “Even with this slap in the face as far as how much time that this man got. I ultimately believe that there is no remorse when it comes to him or anybody on the defense in general. I just wanted them to see her as a person.”

The ruling shows the need for gender identity and expression to be included in Texas’ hate crime law, says Leslie McMurray, transgender education and advocacy coordinator at the Resource Center in Dallas. If the state could prosecute the case as a hate crime, she says the attacker could have faced a felony charge and state prison.

Texas isn’t alone in the issue. Hate crime laws don’t cover gender identity in 30 other states, including Florida, where at least seven transgender people have been killed in the last two years.

Cathalina Christina James: Family says her unsolved murder is ‘not a priority’ for police

Avid traveler Cathalina Christina James planned to leave Jacksonville, Florida, and head home to Florence, South Carolina, the day police found her dead. Wanting answers from 300 miles away, her family rented a van and drove along the roads James should have.

Four siblings and James’ mother, father and stepmother made the trip a day or two after hearing of the June 2018 killing, recounts De’Andra James, a sister.

They stopped at the hotel where police believe the 24-year-old black transgender woman died and looked for locations of all security cameras. They stood in the room where she had packed her bags and talked to the employee who had seen James come down for breakfast on the day she was fatally shot. They asked the cleaning staff for the path a suspect ran along and what he looked like. 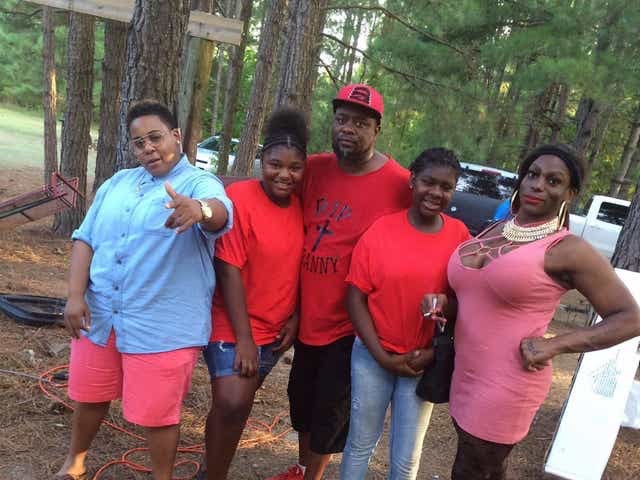 “Sometimes people don’t feel comfortable talking to the police,” James says. “But if you got somebody’s family here in your face pleading, ‘I’m trying to find out what happened to my sister. We just want closure…’ We just felt like maybe we could get some extra information to give to the police to try to piece the case together.”

Her mother and father did deliver the information to detectives at the Jacksonville Sheriff’s Office, James says. Nearly 17 months later, no suspect has been arrested, according to the sheriff’s office database. There is no new information on the active homicide investigation, public information officer Christian Hancock said.

Her story reveals a nationwide problem: A beloved trans woman was brutally murdered by her boyfriend

In a five-month span, James was one of three transgender women murdered in Jacksonville. The killing of Antasha English is also unsolved, while the sheriff’s office announced the arrest of a suspect in Celine Walker’s case in September, 19 months after she was found dead.

Family members hold pictures of Cathalina Christina James, who was killed in June 2018, at her celebration of life. Siblings (left to right) Tameka, Candace and Mylann James, along with their mother Quenstella James, are waiting for an arrest in the homicide investigation.

While Hancock did not respond to USA TODAY’s request for comment about how the sheriff’s office has handled the deaths, Duncan says the office has since created an LGBTQ liaison team, hosted a town hall and conducted training on how to better serve the transgender community.

While those efforts to rebuild trust won’t undo past missteps, De’Andra James remains hopeful for a breakthrough in her sister’s case.

“We got in our hearts that one day, justice will be served on the behalf of Cathalina and the family will have closure,” she says. “It may not be today, tomorrow or next year, but it’s coming because we’re not going to let up. We’re gonna keep pushing the issue until some results get produced.”

While arrests and prosecutions can temporarily take transphobic attackers off the streets, Texas advocate McMurray says neither prevent violence. The inclusion of transgender people in anti-discrimination laws can make the community less vulnerable, however.

“Trying to get somebody arrested is after the damage has already been done,” McMurray says. “… If I was to say what was the most important thing to me, I would say that we don’t get murdered in the first place rather than prosecuting the people that do murder us.”

Rosenda Ortiz, left, and Patricia Ortiz, sister and aunt of Nikki Enriquez, display pictures and drawings of Enriquez. She was one of at least 29 transgender people killed in 2018.
RICK JERVIS

But, Duncan considers appropriate law enforcement responses to be just critical as violence prevention efforts. All deal with how transgender people are perceived, treated and included in society.

‘Shocking’ numbers: Half of LGBTQ adults live in states where no laws ban job discrimination

Are they treated as less than? Are their lives not as valued? Are they reduced to a number?

The fatality count is the focus of some stories on transgender killings, says Eliel Cruz of the Anti-Violence Project, an anti-LGBTQ violence organization. Meanwhile, the loss of each loved one continues to devastate family and friends.

“We’re seeing these deaths become the 27th person, the X-Y-Z person,” Cruz said. “And we’re losing the greater context of that individual’s life and honoring them post-death, which can also in and of itself be violence.”

If you’ve experienced or witnessed anti-LGBTQ violence, or are concerned about someone who has, you can call the Anti-Violence Project hotline 24/7 at 212-714-1141. All calls are confidential. You can also report violence anonymously or ask for a counselor to reach out to you online.