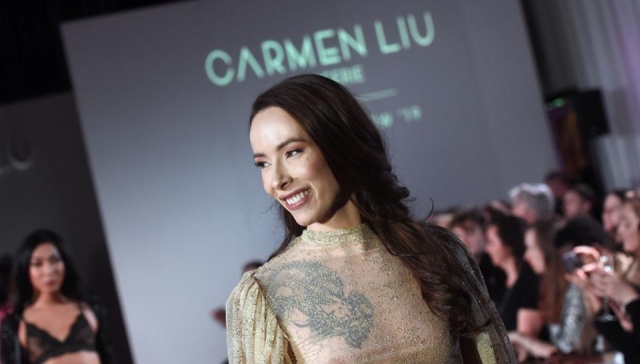 When Carmen Liu stepped into the lingerie department of a store, all she felt was frustration. Amid the rows of satin and lace, the everyday cotton, and the special occasion silk, there was not one pair of panties she could wear.

As a transgender woman she felt completely left out of the lingerie market. An estimated 0.6% of the U.S. population identifies as trans—around 1.4 million people. However, figures vary and there is still a lack of conclusive data. In the UK—where Liu hails from—figures are even harder to come by but the country’s biggest LGBTQ+ charity Stonewall estimates there are around 600,000 trans and non-binary people in Britain, or 1% of the population. Liu was appalled that, in 2019, there was not one mainstream store that stocked lingerie suitable for trans women.

She decided to take matters into her own hands and, after securing funds from a private investor in the summer of 2018, the London-based entrepreneur set to work designing a small collection of panties for trans women. The GI Collection launched in February 2019 and sold out within days. More than 50% of sales were from overseas customers, and Liu has since expanded the collection to include eight styles.

“I had this business idea circulating in my mind for two years, thinking of how I would design the lingerie if I had the opportunity,” she says. “I wouldn’t say there was lightbulb moment as such. The idea hit me due to pure frustration of not being able to buy lingerie. Once I got the green light I began working 16 hours most days to cover every detail and possible option that would benefit and bring positive change to our community.”

Part of Liu’s frustration, she says, came from the perceived “woke-washing” of brands who tried to appear LGBTQ-friendly while failing to cater to her community’s specific needs.

“There are many brands out there that will use trans individuals as a selfish marketing ploy, yet they do not cater for us,” she says. “We do have specific design needs and we need to be heard and catered for. We should be allowed the experience of lingerie shopping on the high street, just like everyone else.”

Like many transwomen, Liu, 27, has not opted to have gender reassignment surgery, so the only underwear option available to her was to wear a kind of jockstrap known as a “gaff” which would enable her to “tuck” her genitals in order to hide them and create a smoother outline. She once described it as being “reminiscent of Borat’s mankini.”

What she wanted—and what she knew there was a market for—was something that combined this functionality with the luxury feel enjoyed by cisgendered woman. “It needed to be strong, yet comfortable enough to hold everything in place,” she said at the time of the collection’s launch. But, she added, she wanted it to be “just as sexy as cisgender lingerie.”

The ability to achieve a flatter, more gender-affirmed look was a crucial starting point for Liu, and she was adament that this could be achieved without compromising on style and luxury. “The key design goal for me was to have lingerie that appears like cis women’s lingerie yet enables us to tuck comfortably,” Liu says. “But I also use beautiful, high-end Italian satins. It was important for me to have a wide size range too.”

She didn’t set out to include bras at first. Transgender women are generally able to find bras that fit in mainstream stores, and it didn’t seem like a priority. But finding matching sets was virtually impossible, so Liu set to work. “Only a few weeks before our first runway I was on a business trip in Hong Kong, and I thought how amazing it would be to finally be able to buy matching lingerie,” she says.

The collection now features five different matching panty and bra sets. And she’s put as much thought into her customers’ needs when it comes to bras as she did with the panties. Certain styles are specifically aimed at women women who are just starting hormone replacement therapy and will likely change cup size, while others cater to those with implants. The sizing is also unique to GI Collection and takes into account that transwomen often require a wider fit.

Prices start at $13 for a pair of panties and $39 for a bra. The styles are wearable enough for everyday, yet fashion-forward enough to appeal to a millennial demographic. They wouldn’t look out of place in Macy’s or London’s Selfridges. Liu hopes stores like this will eventually stock her collection. For now, she offers worldwide shipping and says her longest-distance order came from Hawaii.

“It’s incredible to think there are woman all over the world wearing my lingerie,” she says. “I know how much it means to them.”