A group of 29 inmates in Immigration and Customs Enforcement’s only transgender unit are calling for outside investigation of the facility, which they say fails to provide livable conditions for its LGBTQ detainees.

Members of Trans Queer Pueblo, a Phoenix-based advocacy group run by LGBTQ migrants of color, received a letter outlining some of the complaints in late June addressed from transgender and gender nonbinary inmates at the Cibola County Correctional Center in New Mexico.

The three-page letter, written in Spanish, paints a disturbing picture of conditions that the group says have put migrant detainees’ physical and mental health at risk.

Cibola County Correctional Center is the only ICE detention center with a unit specifically for transgender women. Able to house up to 60 people, it was created in 2017, following reports of mistreatment of transgender people within the U.S. immigration detention system.

After its opening, women from detention centers throughout Arizona — including the government’s Eloy, Florence, and La Palma facilities — were transferred to Cibola, a for-profit correctional facility in Milan, New Mexico, about 80 miles west of Albuquerque. Though ICE has an Obama-era ICE guidance memo on caring for transgender migrants, the Cibola pod is not required to comply with this guidance.

The facility is where Roxsana Hernandez Rodriguez, 33, a transgender woman seeking asylum from Honduras, died of HIV-related complications and dehydration shortly after entering in 2018. An independent autopsy confirmed her cause of death, but found that she was physically abused during her time in ICE custody. ICE denies the findings of this autopsy report. Cibola also houses Alejandra Barrera, a transgender El Salvadoran woman whose ongoing incarceration has drawn international controversy. She has been detained at Cibola since she first filed for asylum on grounds of persecution for her gender identity in her home country nearly two years ago.

The 29 migrants from the letter say medical staff fail to provide proper health care to people with disabilities and HIV-positive individuals, and deny treatment for visible skin infections — some of which they allege were contracted within the facility. They say several detainees have been denied necessary medications. The inmates describe daily verbal and psychological mistreatment from officers, and a fear of retaliation in the face of complaints.

“We are afraid of repression but more afraid of being in this situation,” the letter states (translated into English by the reporter). 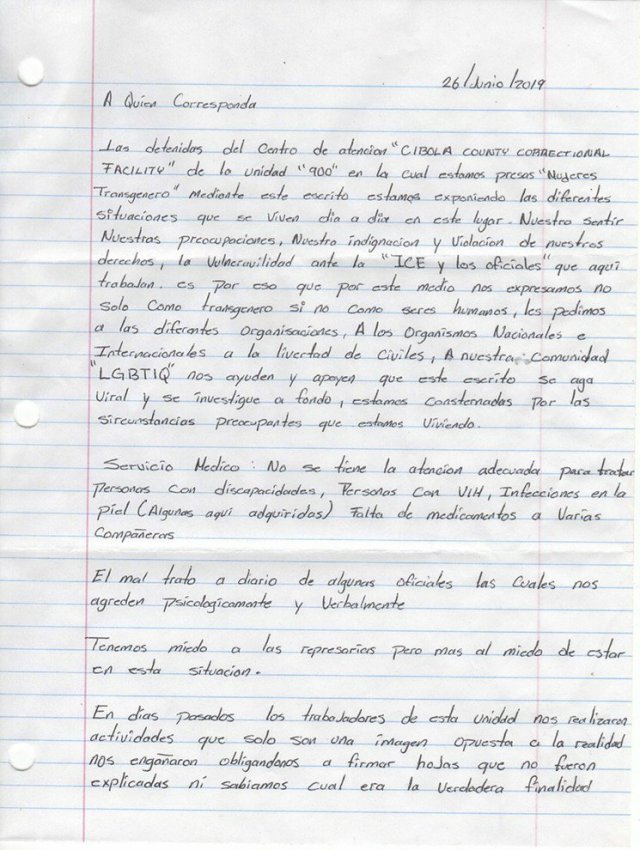 The handwritten letter is dated June 26, 2019 — just days after Cibola County Correctional Center gave a media tour of the transgender unit for the first time. ICE tweeted about the visit the next day, with photos showing inmates playing basketball, gardening, and getting their hair done in the unit’s salon. The letter, which came in an envelope stamped with official U.S. postage from the Cibola ZIP code, additionally alleges the detainees were forced to sign documents they did not understand ahead of the tour.
Members of Trans Queer Pueblo said they received the letter because their organization worked with many of the pod’s detained migrants when they first came to the United States by way of Nogales, Arizona, as part of one of the 2018 migrant caravans. The group traditionally supports transgender women and gender nonconforming migrants in Arizona, but the ICE policy has moved many of them out of state to the more-remote Cibola unit, or pod, which Bautista said isolates them from advocacy groups and crucial legal resources.

“This is the lie of ‘safe’ LGBT pods,” said Dagoberto Bailon, general assistant for Trans Queer Pueblo. “This is ICE’s strategy — to make sure that LGBT people are as far away from the support of migrant organizations as possible.”

Karla Bautista, “coordinator of liberation” for Trans Queer Pueblo, has been corresponding with migrants detained in the Cibola transgender unit since April. The detainees who signed the letter were not available for interview. (Those contacted cited safety concerns).

But Bautista, a transgender woman from Guatemala, said reports like the ones detailed in the letter are common. One inmate told her that officers threatened to take away her food when she didn’t want to participate in news media pictures at the facility beauty salon. Another described a diabetic detainee who had previously had an altercation with an officer being denied treatment for chronic diarrhea — she was given medication after six months of symptoms.

In an emailed statement, Brandon Bissell, manager of public affairs at CoreCivic, said the company is committed to providing a safe environment for transgender detainees.

“A robust grievance process is available to all at Cibola County Correctional Center, which we encourage individuals to utilize,” Bissell said. “The grievance process provides multiple avenues for concerns to be raised, including toll-free telephone numbers. Additionally, all inmates have access to management staff.”

Bissell added that officers receive training on respectful interactions with LGBTQ detainees, and their ICE-contracted facilities are held accountable to federal Performance-Based National Detention Standards, which include guidelines for the appropriate accommodation of transgender detainees.

The 29 migrant detainees from Cibola, who signed with their full names and identifying “A-numbers,” ask for the national and international human rights community to launch an official investigation into the facility.

In light of the letter, Trans Queer Pueblo is also calling for an end to the policy of gay and transgender “pods” in ICE facilities, a release of all LGBTQ migrants in detention, many of whom have come fleeing persecution in their home countries, and complete closure of the facility.

“A lot of these women come from a background in organizing, so it’s unsurprising that they would continue with their same activism here in the United States,” said Wes Brockway, director of litigation at the Santa Fe Dreamers Project, which provides legal services to many of the transgender women detainees at Cibola. “They’re doing what they can in the limited capacity they have — because they are so cut off from the world — because they understand that there are similarly situated people who will continue to come. If they are released, if they do win asylum, they don’t want this to continue for the women who come next.”

The average amount of time a transgender migrant spends in detention is 99 days, more than double the average time other migrants spend in ICE custody, according to a Center for American Progress report. Because many come on claims of fleeing persecution in their home countries, this extended time is likely because they’re waiting for a judge to review their asylum cases. 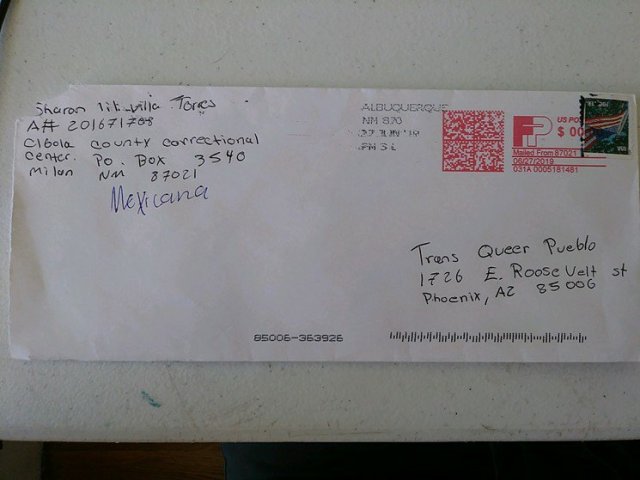 Cibola County Correctional Center has housed immigrants since 2017, when the U.S. Attorney General’s office approved a county contract with CoreCivic, formerly called Corrections Corporation of America, the private prison company that runs the facility. It previously had operated as a federal prison, but the U.S. Bureau of Prisons canceled its contract with CoreCivic to hold prisoners at Cibola earlier that same year, after finding multiple deaths due to improper care at the facility. ICE took over shortly thereafter.

“ICE takes seriously all allegations and investigates them thoroughly,” ICE Public Affairs Officer Yasmeen Pitts O’Keefe said this week in an emailed statement, while noting that the agency cannot comment on any allegations of medical mistreatment without specific details. “ICE encourages such specific reporting so that all allegations can be thoroughly researched and corrected, if necessary, or debunked.”

Roxsana Hernandez Rodriguez was one of two transgender women to die in ICE detention in just over a year, raising questions about immigration enforcement’s ability to care for LGBTQ and HIV-positive asylum seekers while in custody. The other, Johana Medina Leon, 25, died in an El Paso facility last month.

The letter ends with a P.S., its letters capitalized: “WE ARE NOT CRIMINALS, WE ARE HUMAN BEINGS, WHO HAVE RIGHTS LIKE ANY INDIVIDUAL.”

Sixteen people have died in ICE custody since the beginning of 2018, according to an American Immigration Lawyers Association analysis of ICE press releases.