On Tuesday, Broadly, Vice’s vertical covering women, gender non-conforming folks, and the LGBTQ+ community, published a stock photo library featuring more than 180 images of trans and non-binary models that, according to the site’s announcement, “go beyond the clichés of putting on makeup and holding trans flags.” It is the first database of its kind, and, while stock photos might seem like the stuff of goofy memes, it actually represents a historic step forward for queer representation in media.

According to an October 2018 New York Times piece on transgender representation in stock imagery, there’s been a recent surge of interest on the part of publishers and others in photos portraying transgender people. But the photos that customers most often chose either feature only white trans women or focus solely on people’s cosmetic appearance and don’t depict them outside the fact of their identity—if they depict them at all. The top three most-used Getty photos of a transgender person feature the transgender pride symbol with a person’s face blurred and cut off.

The issue of diversity in stock photoshas long plagued digital media companies that rely on stock imagery to supply accompanying art for articles. It’s been an issue here at Slate, where our art director Lisa Larson-Walker has made a conscious effort to review who appears in the stock images we use and how they’re being depicted. J. Bryan Lowder, editor of Slate’s LGBTQ section Outward, remembers a time when a moratorium on rainbow flags had to be declared because they were appearing on every single article. But that attempt at variety only made things harder. “There just haven’t historically been many options for respectfully and creatively illustrating LGBTQ stories in the stock photo services we draw from, especially when it comes to trans and other gender-diverse individuals, who are often reduced to stereotypes built around ‘subverting’ cisgender expectations of ‘normal’ gender presentation,” he says.

That’s the gap that the Gender Spectrum Collection, which is public, free to use (with some restrictions), and features high-quality photos by trans artist Zackary Drucker, is filling.* And it’s an important gap to fill for a few reasons, accuracy chief among them: One of the stories that Broadly editors mention as a catalyst for creating the collection involves them, early in the site’s existence, erroneously using a photo of a cisgender man in a story about trans women written by now–staff writer, then-freelancer Diana Tourjée.
There’s also the issue of art’s influence on society. As the editors explain in a piece accompanying the debut of the collection, “because only 16 percent of Americans say they know a transgender person, the majority of Americans understand what it means to be trans through the media they consume, making media imagery depicting transgender people particularly significant.” When most stock photos of transgender and non-binary folks only show them as figures half-obscured by the trans pride flag, it makes it harder to imagine them as anything but trans rather than as “human beings with careers, relationships, talents, passions, and internal lives—people you see at the office, at school, in your home.” In the Gender Spectrum Collection, which depicts 15 trans and non-binary models doing everything from getting a drink to reading tarot to making phone calls, the everyday beauty of queer life has finally been brought into focus. 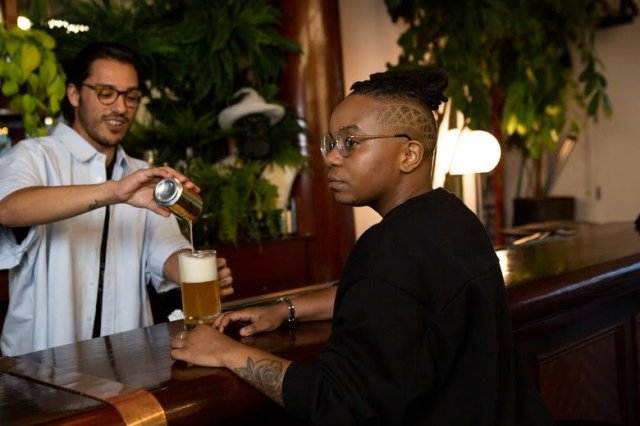