Anna Lange, who works for the sheriff’s office in Houston County, Ga., discovered that her health insurance plan excludes transgender services. She is seeking to challenge that policy.

When Sgt. Anna Lange moved with her young family from Columbus, Ga., to the state’s more rural Houston County, her main priority was being able to stay near her son.

After five years of marriage — and many more years of internal turmoil — Lange had realized that despite being assigned male at birth, she’d felt female her entire life.

She had decided to undergo gender transition and knew it would eventually end her marriage. She also knew her soon-to-be ex-wife would want to move back home to Houston County, an hour and a half’s drive from Columbus.

“I wasn’t going to be that far from my son,” Lange said. “It wasn’t like I was thinking of, you know, the super-open community,” she said with more than a hint of sarcasm.

Although she’d loved working at the police department in Columbus, she took a job with a national insurance company in Houston County, hoping for a more accepting, less conservative environment than law enforcement.

She found the corporate structure so stifling, she didn’t even make it out of training. Within three months, she was once more wearing a badge and gun as a patrol officer at the Houston County Sheriff’s Office. She’s been there since 2006 and has been promoted twice.

That’s why it stung so much when she learned late last fall that the county’s employee health insurance plan wouldn’t cover any of her transition-related surgery. Although federal law prohibits health insurance plans from discriminating against transgender individuals, the plan adopted by Houston County specifically excludes trans-related health care from coverage.

The exclusion came as a shock. After Lange was told by Anthem Blue Cross and Blue Shield that her insurance would cover gender-confirmation surgery — and had her New York City-based surgeon confirm it — she traveled to Manhattan last November for a consultation. Shortly after she returned, she received a letter informing her that her employer’s plan would not, in fact, cover her procedure.

She then contacted Transcend Legal, a New York City-based nonprofit organization, and is now represented by Noah Lewis, the organization’s executive director. After the Houston County Board of Commissioners didn’t respond to a Jan. 16 letter from Lewis requesting that the board remove the exclusion, Lange and Lewis made their request in person during a meeting of the board on Feb. 19. Their request was denied; Lange now plans to sue Houston County in district court.

“The board is not considering any changes to the law at this time,” said Houston County Attorney Tom Hall in response to Lewis’ request, adding that he’d directed the commissioners themselves not to comment given the possibility of future litigation.

Lange’s is one of two Georgia cases challenging transgender exclusions in employee health plans. Skyler Jay, a trans man who appeared on an episode of the popular Netflix series Queer Eye, is currently suing his employer, the University of Georgia, in a lawsuit challenging its health plan’s similar exclusion. Jay is also represented by Lewis.

Within the past six months, transgender government employees in Wisconsin and Iowa have won similar cases and were awarded a total of $900,000 by juries. “It’s definitely going to be more expensive for them to defend it in court,” said Lewis of the Georgia state employee policy exclusion adopted by Houston County. “They can avoid that result by just voluntarily removing the exclusion.” 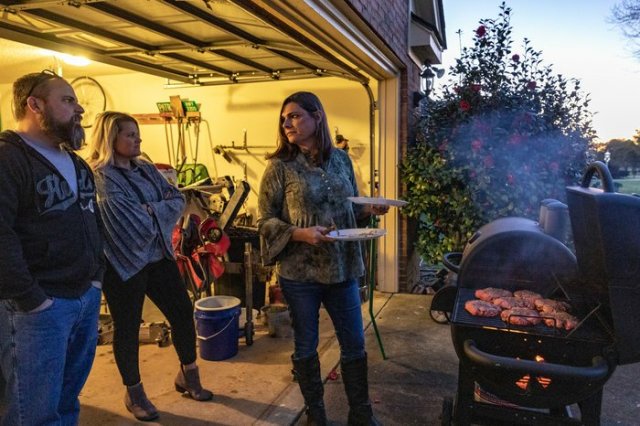 Gender dysphoria is the American Psychiatric Association’s name for the distress caused by discordance between one’s assigned gender at birth and the gender they identify as. Multiple major medical societies, including the American Medical Association, have endorsed the medical necessity of treating gender dysphoria with “gender-affirming care,” which may include hormones, surgeries or neither.

As the medical community has shifted from viewing gender-affirming care as cosmetic to understanding it as medically necessary, many insurers, including Medicare and many Medicaid programs, have likewise shifted to covering both surgical and nonsurgical trans-related health care.

Alongside them, the law has evolved to forbid discrimination against trans Americans. Section 1557 of the Affordable Care Act prohibitsentities that receive federal funding for health coverage from denying coverage based on sex, gender identity and sex stereotyping. And the Americans with Disabilities Act and Title VII of the Civil Rights Act have also been broadly interpretedby courts to protect transgender individuals from discrimination.

Despite both medical and legal consensus, 30 states allow health insurance plans to exclude transgender-related health care from coverage. Most of these states are in the South, Midwest and Great Plains, and most have a relatively high proportion of rural residents.

Shortages in rural health care workforces, low rates of insurance coverage, and long distances from health care facilities have made it challenging for many Americans outside urban areas to find high-quality, affordable health care. Transgender people in rural areas often face particularly acute challenges when it comes to findingcompetent providers and obtaininghealth insurance.

That doesn’t mean they’re all eager to flee. Connections to home, land, language and heritage are powerful, said Knutson: “People have specific reasons for living in rural areas.”

Lange certainly does. Although she would love to be in a more welcoming environment, she remains in Houston County because of her son. “I’m a good parent,” she said. “I love him too much and I’m not going anywhere.”

She also has no intention of leaving law enforcement. If she did, she’d be leaving behind a retirement plan. Plus, she was recently promoted to sergeant in criminal investigations, and she finds it deeply satisfying to help people and solve crimes. 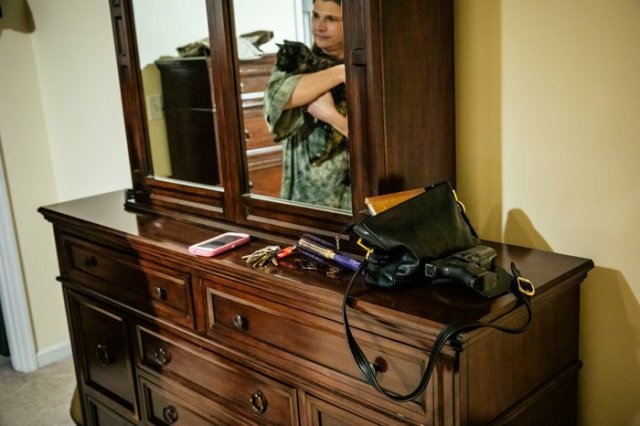 Lange enjoys her job working in criminal investigations and was recently promoted to sergeant.

When trans people challenge employers’ policies in stereotypically conservative settings, they often encounter resistance, said Knutson. “There’s the feeling, ‘Why does the battleground have to be here?‘ ” he said.

Although it might seem easier to switch employers than fight an unwelcoming institution for equal treatment, he said, job searches are often expensive and require a financial cushion that many people – especially public servants — don’t have. Additionally, he said, for many, “there’s a commitment to vocation”; like Lange, many people simply like their jobs.

Studies assessing the financial implications of covering transgender-related health care have demonstrated that the cost of care to insurers, including hormones and surgical therapies, is relatively small. Hormone therapy, which around 75 percent of transgender people seek, starts at $20 to $80 a month and is usually taken for the duration of a person’s life after transition. Surgeries range widely in type and cost anywhere from $5,000 to $50,000 each, although many trans people don’t desire surgical treatment.

Perhaps of even greater significance is the finding that providing this coverage is cost-effective. Untreated gender dysphoria leads to high rates of adverse — and expensive – outcomes, including HIV infection, depression, suicidality and drug abuse. The cost of accepting these outcomes outweighs the cost of treating their cause.

Still, state and local governments have pursued costly court battles to maintain these exclusions. “Officials look at this as a political issue instead of as the medical and equal employment issue that it should be,” said Harper Jean Tobin, policy director of the National Center for Transgender Equality.

Lange hangs out at home with friends Balducci and Buchanon-Romano, who came over for a cookout.

Respondents were divided along partisan lines, with 60 percent of Democrats saying society hasn’t done enough compared with 12 percent of Republicans saying that.

Nevertheless, said Tobin, persistent transgender stigma in certain circles causes some lawmakers to assume that inclusive policies will be unpopular in their communities.

“Increasingly,” she said, “I think they’d be surprised.”