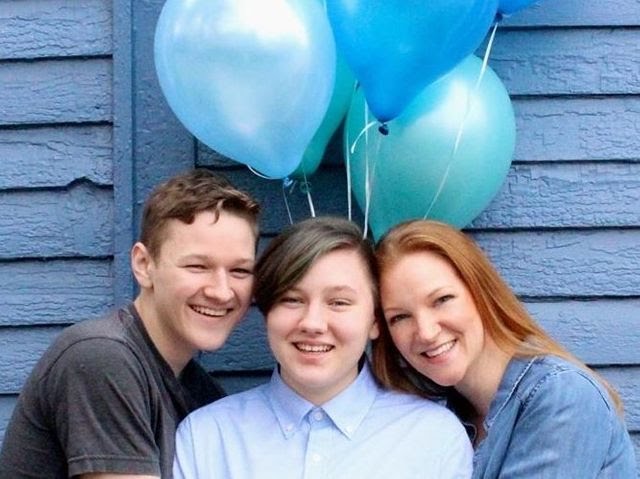 Kentucky mom Heather Green was so extra for her son’s 20th birthday photos this year.

Your son only comes out as transgender once, after all.

“When your child comes out as trans, the best thing to do is create a photo shoot to celebrate the fact that he silently and bravely stepped out of the race that he never wanted to be in, found his own lane and proceeded to win,” Green said in aviral Facebook post.

Adrian Brown, 20, came out to Green and younger brother Lucas, 17, in September.

Green’s photo shoot — which was themed as a baby gender reveal with blue balloons, glitter, “It’s a boy” messaging and a faux pregnant tummy to show she was gaining another son — is the ultimate show of support.

It’s important to spread a message of acceptance and support for the transgender community publicly, Green said, noting the high rates of attempted suicides among transgender boys.

About half (50.8 percent) of female-to-male adolescents reported having attempted suicide, according to an October 2018 study published by the American Academy of Pediatrics.

“How could we not!!?? The transgender community is under attack by our president for goodness sake. These people who are transitioning are not receiving the honor and praise that they are due,” Green told All the Moms. “The courage it takes to step out and live their truth while so many people are waiting to knock them down is amazing to me. I hope that by sharing our story, the transgender community will allow themselves to expect celebrations and that they will no longer feel that they are infringing on anyone else by sharing their journey.”

Brown said when his mom proposed the shoot, some of the ideas struck him as corny. But his mom has a way of making things fun and he just rolled with it.

Adrian Brown, 20, said he and his mom laughed all the way through the photo shoot, even during the shots that were “nuts,” like this one.
COURTESY OF HEATHER GREEN

“At first when my mom said she wanted to swaddle me in a blanket, I thought she was nuts. But then when we got going we had so much fun and laughed our way through all of my mom’s strange ideas.”

The most surprising, life-saving feedback

Green said she was “100 percent aware that ‘outing’ him on this level can also be dangerous because of all of the hate in the world.” But that’s not what she experienced.

She’s had parents asking for advice on children who have also expressed a desire to transition. She tells them she’s no pro, but can offer her instincts.

“I’ve had some great conversations and I hope that they will continue, no one should have to feel alone on this journey. Everyone has to transition, the individual and their friends and families,” she said.

Other families have asked to steal the idea, to which she’s replied, “Of course!”

The greatest feedback, though, came from Green’s youngest son and Brown’s brother, Lucas. Lucas said the coming-out photos were more than a lark, but a life-saving message.

“Without saying anything, he pulled me into a tight, bone-crushing hug and held me,” Brown said. “He proceeded to tell me that a trans boy at his school had come out to his parents after seeing our post. He had been considering suicide before coming out to them and because of our message he had the courage to tell them and found out that his parents were going to support them. He would not have had the courage had we not taken theses photos.”