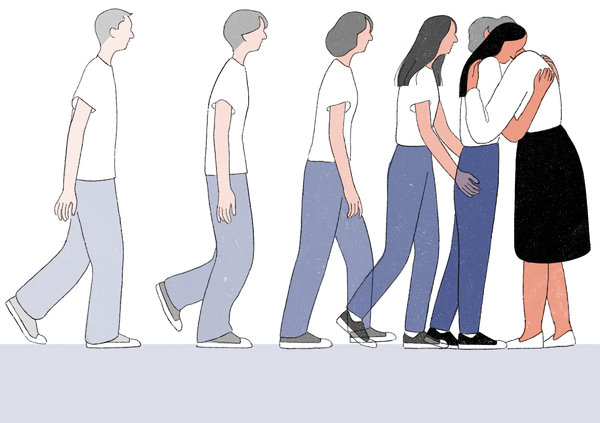 At the end of the long weekend when my daughter came out as transgender, she headed back to her car with her girlfriend. I watched them from my apartment window as they packed up. My child looked up, and waved.

Then she drove off.

I closed the window. Tears rushed to my eyes. She’s saying goodbye, I thought. I’ll never see her again.

This, of course, turned out to be malarkey.

In the months to come I’d see her lots of times, and each time she seemed happier, and more herself.

You’d think that as a transgender person myself, I’d have rolled right along with my daughter’s unveiling. You’d think that I’d have been able to show her even half the grace that my 80-year-old, Republican, evangelical mother had shown me, almost 20 years before.

In spite of everything I know about being trans, I still had lots of my own dreams tangled up in my daughter’s — formerly son’s — life. I loved that child exactly as they had been. The idea that this person was now going to be different made me think, at first, that something precious to me was being taken away.

If it was a struggle for me, I can only imagine how hard it is for other parents.

Unfortunately, what many other parents are receiving right now is not encouragement to find wisdom and understanding. What they are getting instead is a bogus new diagnosis — Rapid Onset Gender Dysphoria. The inventors of this spurious term claim that R.O.G.D. is not a real trans identity but the product of social pressure.

Abigail Shrier, writing in The Wall Street Journal, describes it as “social contagion.” She says that young people — many of them college-aged, and most of them born female-bodied — are embarking upon transition, with its surgeries and hormones and other accompanying challenges, in the same way a person might take up the ukulele.

Even the headline on that essay is an insult: “When Your Daughter Defies Biology.” An abundance of scientific research makes clear that gender variance is a fundamental truth of human biology, not some wacky dance craze.

Transgender people have not come up with the entirety of our existence solely to hurt Tucker Carlson’s feelings. We do not embark upon transition because it’s groovy. We are here because our hearts demand it.

R.O.G.D. is not a clinical term. It’s a political one, designed to undermine the validity of these young people’s transitions.

The term originated a few years ago on three blogs with a history of promoting anti-trans propaganda. There has been only one study on it, in the journal PLOS One. But the study isn’t about the children in question; it’s about their parents, who were recruited for the study by ads placed in the conservative blogs that had invented the concept of R.O.G.D. in the first place.

What was my problem, you ask? Above all, I did not want my child’s life to be hard, in the way that my own life has been hard.

But if you want your children’s life to be hard, the quickest way to that end is to tell them that their deepest sense of self is nothing but a fad, and that you know them better than they know themselves.

I’ve noticed something fascinating since my child came out, and it reflects the difference between generations over what being trans means. When I began to share my truth, almost 20 years ago, I spent a couple of years going around to people apologizing, begging for understanding, begging, at times, for forgiveness.

But my daughter’s generation is different. She has never apologized for who she is. Since she came out, her friends have reacted with joy and happiness for her, even — dare I say it? — indifference. Their sense is that being trans is just one more way of being human, and surely no source of shame.

That’s a lesson that people my age need to learn. Being queer is no longer something that needs to be tolerated, or accepted, or forgiven. It never was.

What it is, is one more way of being human. And the proper response to our children’s humanity should be love. That’s true whether they turn out to be trans, or gay, or straight, or even Republican. They are not here to live our version of who we think they ought to be. They are here to be themselves.

When my child raised a hand to wave at me, my first thought was that my son was saying goodbye. I was wrong.

It was my daughter, saying hello.