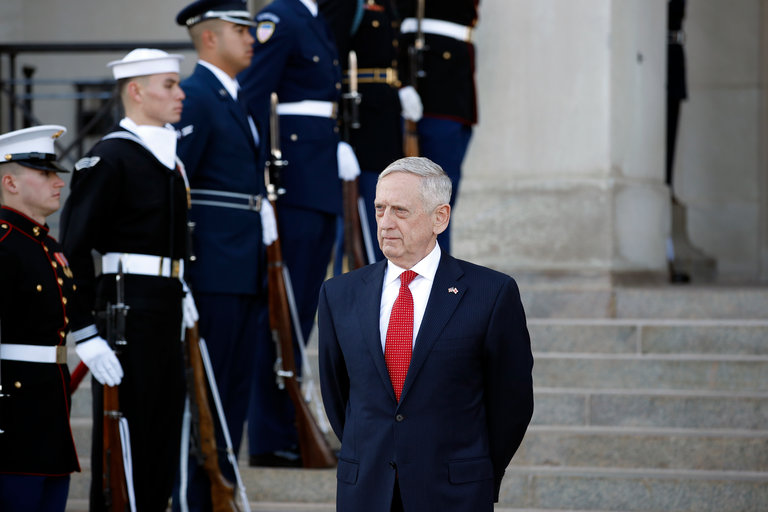 WASHINGTON — Transgender people will be allowed to enlist in the military beginning Jan. 1, Defense Department officials said on Monday, a move that pauses President Trump’s effort to bar transgender troops.

A federal judge allowed an October order pausing the ban to remain in effect, pending further legal review. The judge, Colleen Kollar-Kotelly of the Federal District Court in Washington, said in a ruling on Monday that the ban most likely violates constitutional rights to due process and equal protection.

She rejected the Trump administration’s argument that it needs more time to prepare to process new transgender recruits for military service.

“The court is not persuaded that defendants will be irreparably injured by allowing the accession of transgender individuals into the military beginning on Jan. 1, 2018,” she wrote.

Sarah Huckabee Sanders, the White House press secretary, suggested that Mr. Trump would continue to seek ways to carry out his ban. “The Department of Justice is currently reviewing the legal options to ensure the president’s directive is implemented,” she told reporters.

Mr. Trump announced the ban in a series of tweets in July. He said then that he had decided to do so after consulting with generals and military experts, although Defense Secretary Jim Mattis was given only a day’s notice.

Advocates for allowing transgender people in the military said they were not yet ready to declare victory.

“What the ruling signals is that both the Pentagon and the courts have recognized that Trump was stepping out of his lane when he tweeted,” said Aaron Belkin, the director of the Palm Center, which advocates on behalf of the transgender community in the military.

But, he added: “This could be a long process. We just don’t know what happens next.”

Since Mr. Trump gave the order, the Pentagon has slow-walked it, telling transgender members of the military that they could continue to serve openly while the Pentagon decided how to handle the ban. Last month, the Pentagon paid for gender-reassignment surgery for an active-duty military member.

Staff Sgt. Ashlee Bruce of the Air Force, who began her transition this year, said young transgender troops like her have been on edge in recent months, but noted that even after Mr. Trump announced all transgender troops would be discharged, her commanders and the medical team overseeing her transition continued to reassure her. They cleared the way for her to begin hormone treatments and have her name changed before she leaves for an assignment in South Korea in March.

Get what you need to know to start your day in the United States, Canada and the Americas, delivered to your inbox.

“Everyone in the leadership kept saying it would be O.K.; they never wavered,” she said. Though she still has to wear a man’s uniform at work, she appeared in a dress for the first time at her squadron’s holiday party last week, with the support of her command.

“It was the first time I could show who I really was, and everyone was so great about it,” she said.

In announcing his ban, Mr. Trump tweeted that American forces could not afford the “tremendous medical costs and disruption” of transgender service members. But the RAND Corporation, in a 2016 study, found that allowing transgender people to serve openly in the military would “have minimal impact on readiness and health care costs” for the Pentagon.

It estimated that health care costs would rise $2.4 million, to $8.4 million annually, representing an infinitesimal 0.04 to 0.13 percent increase in spending. Citing research into other countries that allow transgender people to serve, the study projected “little or no impact on unit cohesion, operational effectiveness or readiness” in the United States.

In temporarily blocking the ban in October, Judge Kollar-Kotelly said that the administration’s justification for it was suspect and probably unconstitutional.

Defense Department officials said that new guidelines, a reinstatement of President Barack Obama’s opening of the military to transgender recruits, first reported by The Associated Press, mean that new recruits will have to undergo medical tests before enlisting.

The Obama administration announced last year that the Pentagon would start accepting transgender recruits in the summer 2017, but after taking over the department, Mr. Mattis delayed the policy’s implementation until the beginning of 2018, pending further review.

Last week, the Justice Department asked a federal court to further delay implementation until the court cases involving the ban are resolved.

Carl Tobias, a professor at the University of Richmond School of Law, said the way forward “seems very uncertain.”

“Many in the military seem open to the prospect of going forward, but Trump seems very opposed,” he wrote in an email. “It is also possible that the government could allow people to enlist but impose such onerous conditions that few would enlist.”