ASBURY PARK – A Scotch Plains man charged in the pepper-spray attack on a transgender person ahead of an anti-hate rally in September pleaded guilty Thursday to a local town offense, disturbing the peace.

He will have to serve 100 hours of community service, undergo a mental health evaluation and pay a $250 fine as part of the plea agreement reached with prosecutor James N. Butler.

“This was a bad situation,” Butler said, regarding the attack.

Allison Kolarik, 34, said she was pepper-sprayed by May on the evening of Sept. 3 after trying to engage him in conversation outside Gift, an Ocean Avenue shop and art space. Volunteers were gathered outside the shop making signs for the city’s “Stand Against Hate’’ rally the next day.

The rally, held on Labor Day at Springwood Park, was planned in response to violence that broke out in Charlottesville, Virginia, in August during a “Unite the Right” rally. A woman was killed and 19 others were injured at the Charlottesville rally when a 20-year-old man drove a car into a group of counter-protestors.

Buy PhotoAllison Kolarik smiles as she passes Morris May and his attorney Mark Gertner after his hearing in Asbury Park Municipal Court Thursday, November 11, 2017. He was charged with assaulting Kolarik. (Photo: Thomas P. Costello)

Kolarik alleged that May was harassing volunteers making signs for the rally. He then let loose with the pepper spray. Kolaris recounts what happened in the video at the top of this story.

Kolarik said May was heard saying, “I hate liberals. I hate you people. You’re trying to take away our rights.”

When reached by phone by the Press on Sept. 4, May said, “I did not attend that meeting to start any trouble. I did not go there intending to inflict harm on anyone. I acted only in self-defense.’’

As May waited for his trial to begin, a police officer in the court warned him repeatedly to put his cellphone away, at one point removing him briefly from the courtroom. 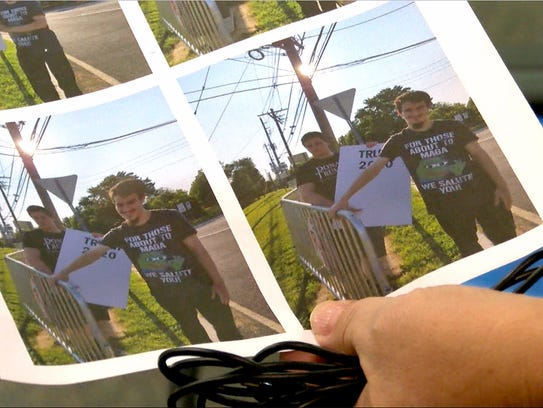 Buy PhotoA woman holds a photo that shows Morris May in Bedmininster in the area set up for protestors when President Donald Trump was staying at his golf course nearby. He is wearing the same shirt that he wore on the day he assaulted Allison Kolarik. (Photo: Thomas P. Costello)

More: For NJ transgender students, a roller coaster on their rights

“More than anything, I’m glad that he’ll have to receive the mental health evaluation,” Kolarik said. Under the terms of the plea deal May is also barred from having any contact with Kolarik.

May and his attorney, Mark Gertner of South Orange, left the courtroom Thursday without speaking to the Press.