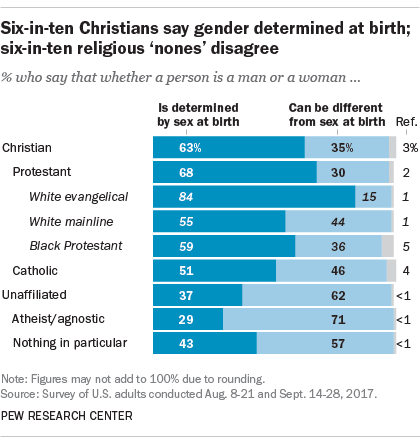 The American public is sharply divided along religious lines over whether it is possible for someone to be a gender different from their sex at birth, according to a new Pew Research Center analysis.

Most Christians in the United States (63%) say that whether someone is a man or a woman is determined by their sex at birth. Among religious “nones” – those who identify religiously as atheist, agnostic or “nothing in particular” – about six-in-ten (62%) say they think a person’s gender is not necessarily determined by the sex they are assigned at birth.

The new analysis is drawn from a recent survey that showed the American public was also deeply divided along partisan lines on the question.

Among Christians, white evangelical Protestants (84%) are most likely to say that gender is determined by sex at birth. Many black Protestants (59%) and white mainline Protestants (55%) also feel this way. Catholics are divided on the question, with 51% saying gender is a function of one’s birth sex, while 46% say it is possible for someone to be of a gender different from their sex at birth.

Religious differences also extend to questions about societal acceptance of transgender people. Most white evangelical Protestants (61%) say society has “gone too far” when it comes to accepting people who are transgender. And Pew Research Center polling conducted in the summer of 2016 found that seven-in-ten white evangelical Protestants think that transgender people should be required to use the public restrooms that correspond with their birth gender.

By comparison, other Christian groups are more evenly divided on these questions. And most religious “nones” (57%) say society has “not gone far enough” when it comes to accepting people who are transgender, and that transgender individuals should be allowed to use public restrooms corresponding to their current gender identity (70%).