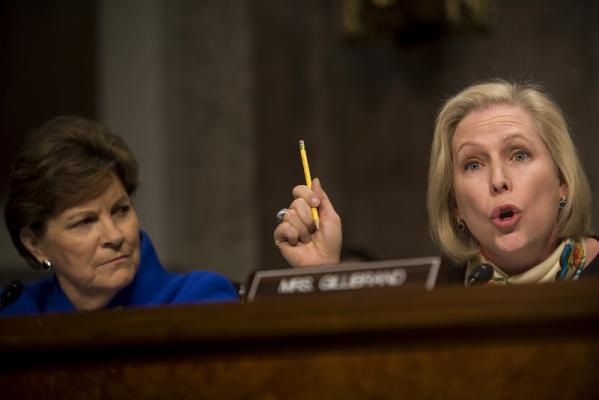 In July controversy was sparked when President Donald Trump announced on Twitter he would be directing military officers to institute a ban on transgender people serving in the military, a response to a debate that was brewing beneath the surface of Washington over whether or not gender reassignment surgery should be covered by Veterans Affairs medical benefits.

It was later decided that Secretary of Defense Gen. James Mattis would review the issue and provide a recommendation.

Gillibrand, who has positioned herself during her tenure as the champion of minority groups in the military, refused to wait for the review and introduced Monday an amendment to the defense budget bill, National Defense Authorization Act.

“Any individual who wants to join our military and meets the standards should be allowed to serve, period. Gender identity should have nothing to do with it,” Gillibrand said. “I am proud to work with Senator Susan Collins, R-ME, to introduce our bipartisan amendment to protect transgender members of our Armed Forces, and I will always fight for our brave transgender troops who put their lives on the line to protect our country.”

The amendment would prohibit the Defense Department from involuntarily separating, or denying the re-enlistment or continuation in service in the Armed Forces of currently serving transgender service members solely on the basis of the member’s gender identity, and would require Mattis to complete his review of accession of transgender individuals into the Armed Forces by the end of this year and report the results to Congress.

Long said she believes transgender people would make the best soldiers “because it means so much to them.”

“I do not see why gender identity should stand in [transgender people’s] way, it’s their right,” said Kathy Greco, of Palenville. “If they are willing to stand for us they should be allowed to.”

Ellie Palmer, of Coxsackie, has many friends who are transgender and said there are far more important things in the world to worry about than the sexual orientation of military members.

“They’re fighting for our country, why not?” Palmer said of transgender soldiers. “They’re no different than anyone else.”

Palmer wants to follow the news to learn more about the matter.

“We just got cable today, so we’ll be watching the news,” Palmer said.

Joseph Martin, of Coxsackie, does not understand why Trump would want to ban transgender people. Martin has found that the story of Trump’s decision has been shared and discussed on Facebook.

“How can you tell the difference?” Martin said of a soldier’s identity. “They’re fighting for us, so what’s the problem.”

The House of Representatives passed the defense appropriations bill in July, and so if the Senate passes the defense budget with the amendment attached the House will have to look at it and vote again.

U.S. Rep John Faso, R-19, who voted for the defense bill in July, has repeatedly said he did not support Trump’s announcement.

“Generally speaking I believe any qualified American should be able to serve in the military,” Faso said. “Moreover, the transgender issue is a matter under thorough review, and I want to await the determinations of military professionals. The most important issue regarding military service should be compatibility with military needs and our ability to defend the nation.”

When asked about whether he would vote for the appropriations bill with the amendment, Faso responded, “It is uncertain whether this amendment will come to the House floor for a vote.”