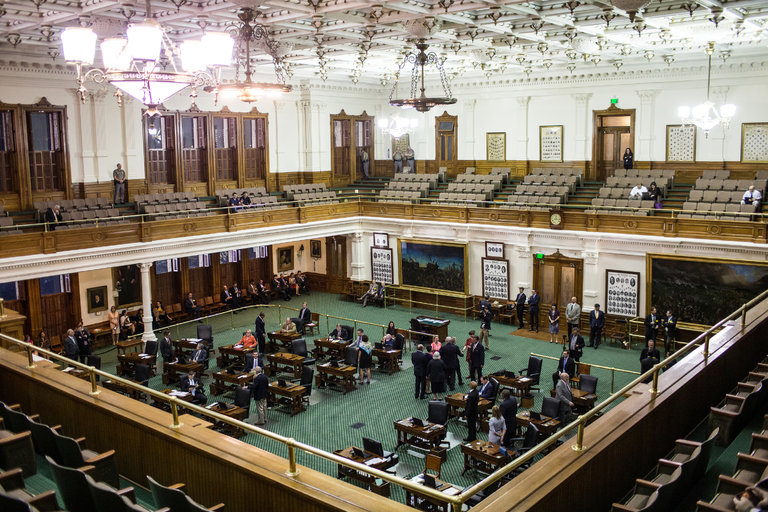 AUSTIN, Tex. — With little more than a week left in Texas’ 30-day special legislative session, a barrage of corporate advertising and activism has the potential to sink legislation restricting transgender bathroom use that has been a flash point in the state’s culture wars.

Social conservatives and the state’s powerful lieutenant governor, Dan Patrick, have backed the legislation. Gay rights groups, business groups and the House speaker, Joe Straus, one of the few powerful moderate voices in the Texas Legislature, have opposed it. But after the State Senate, where Mr. Patrick presides, passed a bill, a narrower one is showing few signs of life in the 150-member House.

The effort is now focused on the House version, but State Representative Jonathan Stickland, one of the bill’s 46 co-authors and a member of the Tea Party-backed Freedom Caucus, said he was pessimistic about its chances of being allowed to advance to a vote.

“I think the Straus team has already decided that they are not going to let it out,” said Mr. Stickland, who, like other members of the staunchly conservative caucus, persistently defies the speaker’s leadership. “This is clearly part of a national agenda that is being pushed by the progressive left, and I think that that is just all coming to a head here.”

The Senate bill would require transgender people to use bathrooms in schools and local government buildings corresponding to the gender listed on their birth certificates or state-issued identification cards. The House bill would prevent school districts and county or local governments from adopting or enforcing nondiscrimination ordinances that would allow transgender people to use bathrooms of their choice. The ordinance override provision is also an element in the Senate bill.

Although law enforcement, religious groups and transgender advocates have all been part of the opposing coalition, big business has been a dominant force throughout the debate.

“Corporate America is stepping forward, speaking loudly about the fact that this will have a chilling effect on business opportunity in this state,” said State Representative Byron Cook, a Republican and the chairman of the House State Affairs Committee, who has thus far refused to call a hearing on the bill. “I’m hearing from many major corporations about this bill and the effect it will have.”

More than 650 businesses, chambers of commerce, and convention and visitors’ bureaus have come out against the bill, according to the Texas Association of Business, which is leading the charge to defeat the legislation. The list includes 50 Fortune 500 companies and more than 400 small businesses, according to the group.

The association is the most powerful business lobby in the state, representing companies with more than two million employees and $8 billion in business. The group’s president, Chris Wallace, said the association moved quickly to form a coalition, Keep Texas Open for Business, against legislation when it became apparent that the bathroom battle was heading to Texas.

“We do not want to do anything to tarnish Texas’ brand,” he said.

The strategy has included a seven-figure radio ad buy, strategically targeted letters signed by prominent chief executives, lobbying blitzes throughout the Capitol and rallies on the Capitol grounds.

Several dozen women, predominately business owners and executives, many accompanied by their children, gathered on the south steps of the state Capitol on Tuesday as 15 speakers attacked the legislation as the work of “extremist” politicians that will blunt the economy and foster discrimination and hate crimes.

“I don’t want my child to be a statistic of the 2017 special session,” said Kimberly Shappley, a registered nurse and ordained minister from the Houston suburbs who was accompanied by her 6-year-old transgender daughter, Kai.

Business executives repeatedly cite North Carolina as Exhibit A in opposing the bill, pointing to millions of dollars in economic losses through boycotts and the cancellations of sports events and concerts after a similar bill passed there in 2016. A study commissioned by the business association also projects billions of dollars in losses in Texas.

Mr. Patrick and other supporters of the legislation say the projections in Texas and the impact in North Carolina have been vastly exaggerated.

IBM, which has 10,000 employees in Texas, has been at the forefront of the drive to kill the legislation. The corporation placed a full-page ad against the measure in major Texas newspapers the day before the session started and has staged two “fly-ins” of company executives to appeal to lawmakers. Virginia M. Rometty, the company’s chief executive, has spoken with Gov. Greg Abbott and Mr. Straus on the phone to air the company’s concerns.

Business’s involvement has increasingly become a target for proponents as they accelerate their efforts in the remaining days of the session.

“I don’t think anybody has seen corporations engage on an issue like this outside the framework of taxes and regulations in our memory,” said Dave Welch of the Texas Pastor Council, which is a leading supporter of the legislation. “I think it’s a combination of a rising moral bankruptcy in corporate America, in which the only thing they support is their image and their bottom line.”

A video ad campaign titled “Big Business Hypocrisy,” sponsored by Family Research Council Action, says major corporations, hotels and airlines are demanding that “Texas expose women and children to policies that could endanger them in the most private of places” — the bathroom — while refusing to “enact the same unsafe policies in their own facilities.”

If the session goes all 30 days — and it could end earlier — lawmakers would adjourn on Aug 16. Mr. Abbott, a Republican, has given no hints on whether he would call another session, although he has been particularly insistent that lawmakers give Texans new safeguards against rising property taxes.

As for the bathroom legislation, the governor told the Austin American-Statesman newspaper on Friday that it was “way premature” to conclude that the House bill wouldn’t come up for a vote.

The intensity of the debate has raised questions about the future relationship between business groups and the state’s Republican leadership, which have shared a decades-long bond. Mr. Wallace, president of the Texas business association, said the bond would remain unbroken despite the differences in the current showdown.

“Ninety-plus percent of the time we are in agreement,” he said. “We just happen to disagree on this issue.”