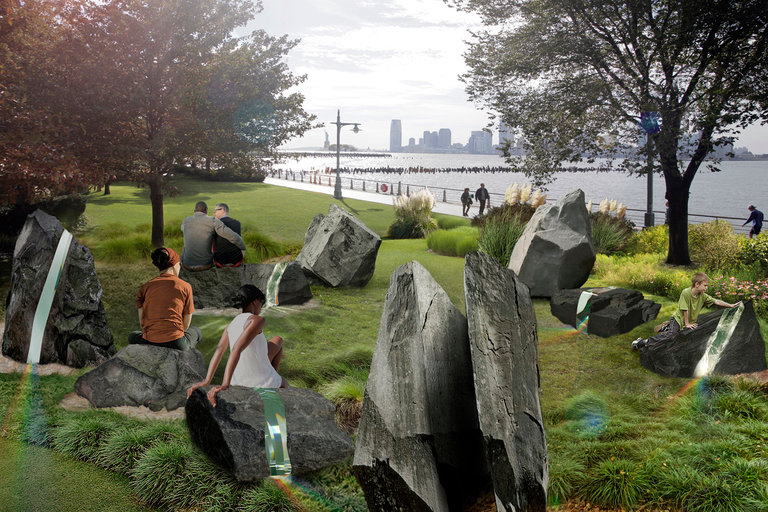 Just as NYC Pride festivities got underway, Gov. Andrew M. Cuomo had some timely news on Sunday: The artist Anthony Goicolea had been chosen to design the first official monument to lesbian, gay, bisexual and transgender people commissioned by the State of New York.

On June 26, 2016, after the attack at the Pulse nightclub in Orlando, Fla., that left 49 people dead, Governor Cuomo formed the LGBT Memorial Commission to honor the fight for equal rights and remember victims of hate, intolerance and violence. A request for designs for the new memorial went out in October. It is to be built in Hudson River Park near the waterfront piers that have played a key role in the city’s history as both a meeting place and a haven for lesbian, gay, bisexual and transgender people.

In Mr. Goicolea’s design, the monument takes the form of nine boulders, some bisected with glass that acts as a prism and can emit a subtle rainbow.

“From Stonewall to marriage equality, New York has always been a beacon for justice,” Governor Cuomo said in a statement. “I am now proud to announce Anthony Goicolea’s stunning design for this monument — selected for the way it complements the landscape and communicates a timeless message of inclusion.”

Mr. Goicolea, a mixed-media artist in his mid-40s who lives with his husband in Brooklyn, said in an interview that the boulders were inspired by sites like Stonehenge and Easter Island as well as burial mounds and African stone circles. The artist, who was born in Marietta, Ga., to parents who had fled Cuba, said he was “constantly being influenced” by history on some level.

“It feels like there are certain shapes and patterns that are encoded in our DNA as humans that transcend any particular culture and speak to how we are unified in the larger scheme,” he said. “I wanted to create a space that feels familiar, even though it is new.”

Mr. Goicolea described his submission as “a cathartic experience.” He explained that his sexual identity and coming of age are recurring themes in his artworks.

Growing up in Georgia, he said he had “never seen my community reflected back at me.” When he first visited the West Village (home of Stonewall and the Lesbian, Gay, Bisexual & Transgender Community Center) and the piers, he added, “It was really eye-opening.”

“I had never seen people — gay people — engaging in this way,” he said. “There was no apology for it.”

Today, Mr. Goicolea often runs in Hudson River Park, and he said he knows how precious green space is to New Yorkers. “They don’t want to give it up,” he said with a laugh.

For his monument design, he said, “I wanted something usable and functional, and that was not going to take away part of the space.” Renderings for the boulders show people (including a gay couple) sitting and relaxing on them.

“I wanted to communicate with the river and the piers,” Mr. Goicolea said. “I really want it to be part of the area.”