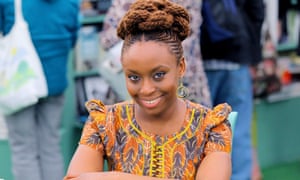 Nigerian novelist and feminist Chimamanda Ngozi Adichie has sought to clarify her position after sparking outrage with comments about transgender women that she made in an interview with Channel 4 News. The author of Half of a Yellow Sun came under attack after she failed to call transgender women “real women” in response to a question.

In the interview, broadcast on 10 March, Adichie said “I think the whole problem of gender in the world is about our experiences. It’s not about how we wear our hair or whether we have a vagina or a penis. It’s about the way the world treats us, and I think if you’ve lived in the world as a man with the privileges that the world accords to men and then sort of change gender, it’s difficult for me to accept that then we can equate your experience with the experience of a woman who has lived from the beginning as a woman and who has not been accorded those privileges that men are.”

In a lengthy post on Facebook on 12 March, the writer, who has campaigned for LGBTQ rights in Nigeria, said she had been shocked by accusations of transphobia and reiterated her support for the rights of trans people.

Though the claim that transgender women are the same as women born female springs from “a need to make trans issues mainstream”, it feels “disingenuous” to take that stance, Adichie wrote. “The intent is a good one but the strategy feels untrue. Diversity does not have to mean division.”

She had intended, in the Channel 4 interview, to highlight the treatment of women, she explains: “Girls are socialised in ways that are harmful to their sense of self – to reduce themselves, to cater to the egos of men, to think of their bodies as repositories of shame. As adult women, many struggle to overcome, to unlearn, much of that social conditioning.”

Noting that trans women have experienced the privileges of living as a male before transitioning, she added: “Because the truth about societal privilege is that it isn’t about how you feel. (Anti-racist white people still benefit from race privilege in the United States). It is about how the world treats you, about the subtle and not so subtle things that you internalize and absorb.”

Some trans women welcomed Adichie’s clarification. Writing beneath her Facebook post, Marit Stafstrom, who describes herself as transgender, said: “It isn’t transphobic to acknowledge the simple truth that there are differences between women and transwomen. It’s just being sane and real, and I think it’s [a] necessary voice within feminist discourse that shouldn’t be dismissed out-of-hand.”

But the majority of reactions remained hostile. Trans activist Kylie She/her tweeted: “Cis women: Please talk to us trans women, start listening to us and stop speaking for us.” She added: “Well, the world treats all women in varied, often oppressive, ways, because it is believed women are lesser. Applies to trans women too.”